For some reason, this keeps creeping later into the offseason (first week of March last year, the third week of February in 2019) but yesterday MLB Pipeline released its Top 30 for 2021. 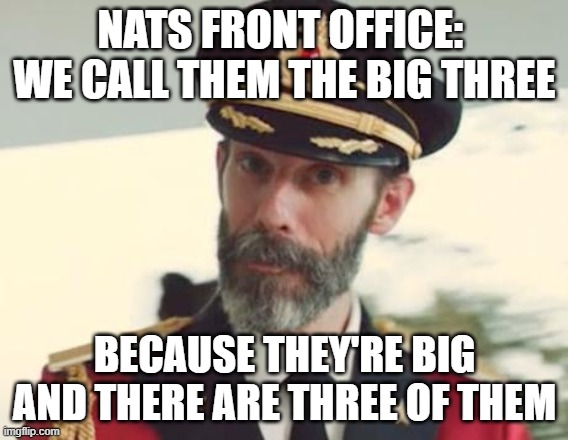 As expected, Cade Cavalli overtook Jackson Rutledge to become the new No. 1 while Cole Henry is No. 3. In its writeup, MLB revealed the team moniker* for the three young pitchers.
* I know PR is harder than it looks, but… really?

As in years past, the list is in lockstep with Baseball America’s until No. 7, which would be the three-point-nine-million-dollar man Armando Cruz. Indeed most of the differences are minimal, one or two spots, until the likes of RHP Joan Adon (#16 MLB vs. #23 BA) and SS Jackson Cluff (#17 MLB vs. #11 BA).

Other dramatic differences include:

As stated previously, this is in line with how some folks place different valuations on the “second tier,” which is perhaps starker with a system that’s ranked dead last and a “seasoned” MLB team coming off a 5th-place finish [insert overused Bill Parcells quote here].

I just hope that we can stop talking about these guys’ rankings and go back to looking at their box scores. It’ll be the second/third shot in the arm we all need.