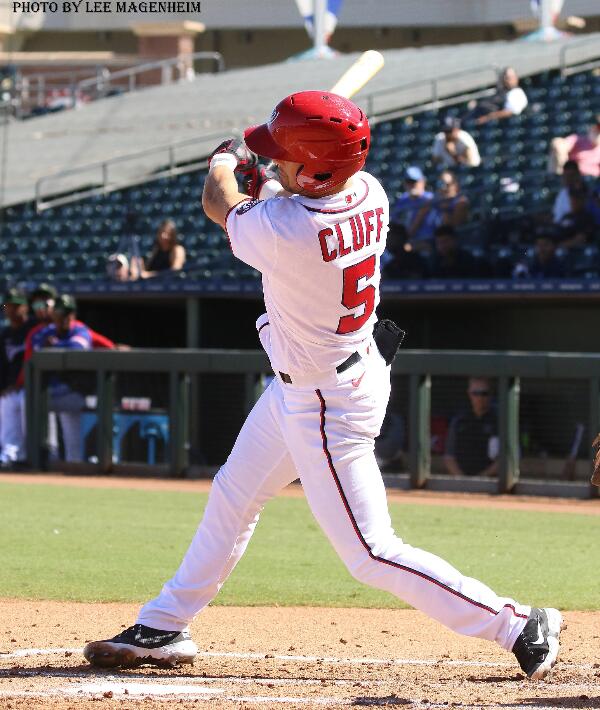 Glendale put up crooked numbers in three straight innings to erase an early 2-0 deficit and take this one from Surprise, 6-4.

Three Nats prospects were in the Saguaros starting lineup.

Donovan Casey led off and played CF. He went 0-for-1 with two walks and a sacrifice fly and had two RBI. He was caught stealing and fielded two singles.

Drew Millas was behind the plate and batted 7th. He went 1-for-4 and had four putouts, including a foul popup.

Jackson Cluff (pictured) manned shortstop and singled in four trips to the plate, scoring a run, and striking out three times. He registered two putouts and had three assists.

Surprise drops to 2-2 and heads back out on the road tomorrow for a grueling 17-minute drive to Peoria to take on the Javelinas.

The Solar Sox burned the Jackson Rutledge candle at both ends of his four-inning start, getting two in the 1st and two in the 4th en route to a 9-3 win over the Saguaros. The Nats’ top pitching prospect (for now at least) not named Cade Cavalli needed 72 pitches to get 12 outs, allowing …

END_OF_DOCUMENT_TOKEN_TO_BE_REPLACED

Ivan Johnson’s third-inning solo shot was enough as four Sagauros pitchers combined on six-hit, 1-0 shutout of the Rafters. Donovan Casey once again led off but was hitless in four at-bats (but no whiffs). In the field—right field—he made two putouts and fielded a single. Drew Millas (pictured above) got the start behind the plate …

END_OF_DOCUMENT_TOKEN_TO_BE_REPLACED 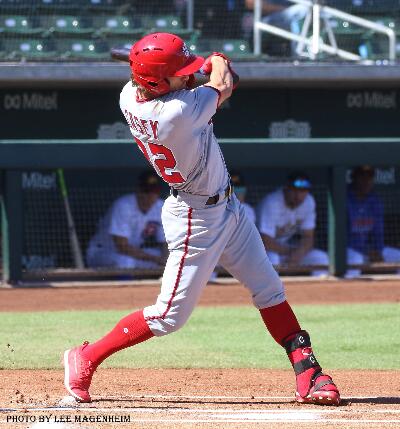 The Saguaros broke out for four runs in the 9th, highlighted by a two-out, three-run double by Israel Pineda to take the 2021 Arizona Fall League opener, 5-0 from the Solar Sox.

Pineda, who came off the bench, finished 1-for-2 and caught the last four innings with no steal attempts or passed balls.

Donovan Casey (pictured) was the sole position player in the Surprise starting lineup. He batted leadoff and played centerfield (no defensive chances), but was just 1-for-5 with one run scored and four strikeouts.

Cole Henry was the only Washington pitcher to appear, coming on in the bottom of the 5th. He pitched two and 2/3rds scoreless innings, with six strikeouts to the first eight batters he faced before issuing a two-out walk in 7th. He threw 36 pitches, 25 for strikes.

Surprise’s home opener is this afternoon against Salt River.

END_OF_DOCUMENT_TOKEN_TO_BE_REPLACED

Can’t really call this an update, as there’s no real news peg. The AFL starts up tomorrow, which means it’s another two days until there is one for sure. I think most of us are simply hoping that the games will show that the guys who’ve been hurt are getting healthy again. This probably applies …

END_OF_DOCUMENT_TOKEN_TO_BE_REPLACED

It’s post-mortem season on the beat writer side and Cade Cavalli cheerleading over at Baseball America. STATE OF THE FARM Mark Zuckerman’s article (linked above; warning – the reasons for the “MASN Commenter” trope are in abundance) gets to the perennial chicken-and-egg question about the failure to draft or the failure to develop. Obviously, it’s …

END_OF_DOCUMENT_TOKEN_TO_BE_REPLACED

Our final look at the leaders, trailers, and outliers in the Washington Nationals minor leagues. Repeats from 2019 are in italics PLEASE NOTE: This format discriminates against multi-level players who were good, guys who were injured, and guys who were traded away. I try to factor in age relative to the level when possible – …

END_OF_DOCUMENT_TOKEN_TO_BE_REPLACED

With barely a week to go, the Nats’ contingent to the Arizona Fall League was revealed yesterday: OF Donovan Casey SS Jackson Cluff RHP Cole Henry C Drew Millas RHP Todd Peterson C Israel Pineda RHP Jackson Rutledge It’s worth noting that only Casey and Pineda are Rule 5-eligible, and only Casey and Millas did …

END_OF_DOCUMENT_TOKEN_TO_BE_REPLACED

The news hasn’t quite slowed down, as we got official word via Baseball America of who’s going (or went) to Instrux and a report from The Nats Report on who’s slated to fill out the roster of the Saguaros; I think you’ll agree it’s, um, not much of a surprise. Looking over the Instrux roster …