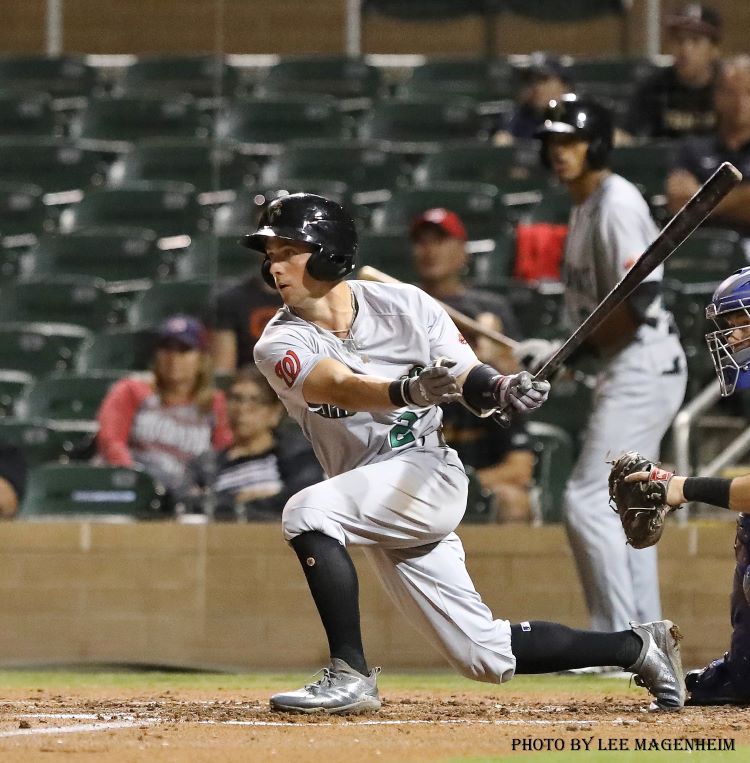 The Sagauros ran their streak to four with a 2-0 shutout on two hits.

The game was presumably limited to seven innings to ensure all hands would be on deck for tonight’s Fall Stars Game.

Luis Garcia once again batted second and played shortstop but went hitless in three at-bats. He had two assists in the field.

Cole Freeman (pictured above) had his second two-hit game while batting 9th and playing center field. He was caught stealing for the second time. In the field, he snagged two flyballs and fielded a single.

Tonight, Garcia and Andrew Lee will represent Washington on the AFL West team.

BA TOP 20 DROUGHT ENDS WITH TWO NATS NAMED FROM THE GCL
After being shut out of the Sally League and a the New York-Penn League, the Nationals had two players make the Baseball America Top 20 (no link; paid sub) – Jeremy de la Rosa (18) and Viandel Peña (20).

As noted in the comments, de la Rosa was colder than the First Lady in July (.414 OPS) before heating up in August (.964), though both of those splits are a mere 13 games. Scouts like his tools, highlighting his ability field, run, and throw. Despite his size (5’11”, 160) they feel he could develop average power though he showed tendencies to get pull-happy and cool down the infield. He turns 18 in January, so the odds are probably better for him to go to the NYPL than the Sally League, though he was skipped past the DSL.

Peña, the surname equivalent to the first name of Jackson in the Nats system, led the GCL in batting average (.359) and trailed teammates Leandro Emiliani (.467) and Junior Martina (.461) in OBP at .455. Beyond his ability to hit for average, Peña profiles as the prototypical Nats undersized IF, compensating for average speed with baserunning savvy and a quick first step. He turns 19 next month, so much will depend on how the Nats place him in relation to other infielders, though scouts like him best at 2B.