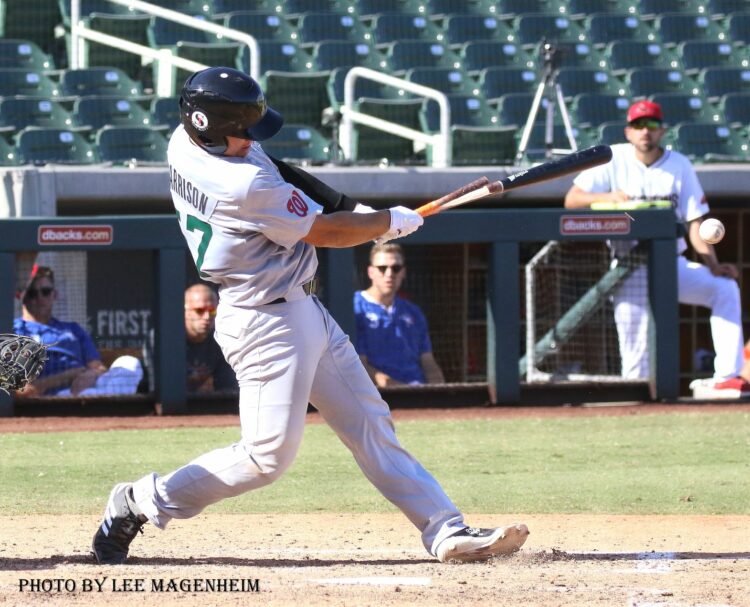 With single runs in the 2nd, 5th, and 7th, the Sagauros built a 3-0 lead on offense while the pitchers just missed a shutout with a single run in the 8th for a 3-1 win versus the Scorpions.

It was a hitter’s day yesterday as three of the four position players appeared in the game.

• Luis Garcia batted second and manned shortstop but was a mortal 1-for-4 at the plate. In the field, he had four putouts, including three popups and the fourth coming along with an assist on a 4-6-3 double play.

• Nick Banks was in the No. 6 slot and No. 9 in the outfield (right field). He doubled and scored a run in the 7th and had three putouts while fielding two singles and chasing down a triple.

• K.J. Harrison (pictured above) went hitless while batting 8th but drew a walk and scored in the 5th. He was 0-for-1 against the Scottsdale basestealers but had 11 putouts and no passed balls in his fourth game behind the plate (not counting instrux or spring training, natch).

The two first-place teams (both 12-6) rematch tonight at the Salt River Fields.

UPDATE ON JAKSON REETZ
Lee reports that the injury to Reetz was a torn meniscus that will require surgery. The recovery time is generally 1-3 months, depending on the severity of the tear.