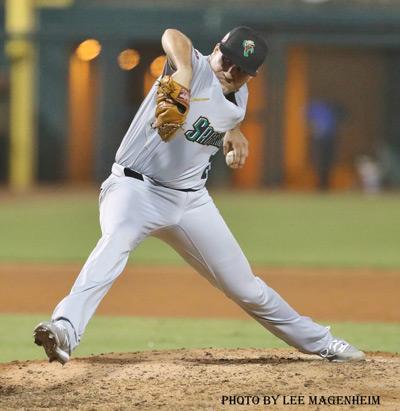 Six Surprise pitchers combined on three-hit, 12-0 shutout of Salt River as the Saguaros improved to 3-1 on the season.

Cole Freeman led off and made his first minor-league appearance in left field, where he made two putouts. At the plate, Freeman singled twice, scored once, walked once, drew a walk, and was thrown out stealing.

Freeman was joined in the lineup by Nick Banks in right field. Banks fielded a single and caught a liner, and went 1-for-5 with a double and two runs scored. He struck out twice.

Andrew Lee and Nick Raquet both made their second appearance and both maintained a 0.00 ERA.

Lee was the first man out of the ‘pen and retired six of seven batters faced, giving up a hit and fanning two over two innings. Raquet (pictured from Opening Night) struck out the side in the 6th and also gave up a hit.

The Saguaros will be the visitors as they play the Javelinas tonight in Peoria.