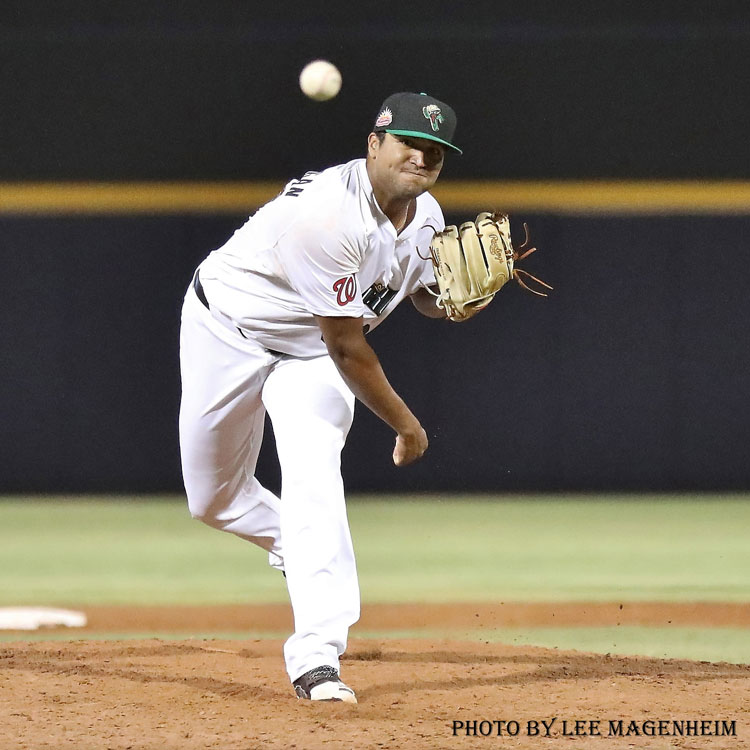 With two-spots in the 4th and 5th and two shutdown innings from Jacob Condra-Bogan (pictured), the Saguaros left the Rafters up the creek, 4-1.

Luis Garcia started at short for the third straight game and hit safely again, going 1-for-4 with two strikeouts. He also committed an error, but made two putouts and started a 6-4-3 DP.

Jakson Reetz was the DH and was 2-for-4 with a double and two RBI, which came on 7th-inning single to break open a 2-1 game.

Condra-Bogan was prefect in the 8th and 9th innings, striking out one, to earn the save.

THE 2019 GCL NATIONALS
While it wasn’t a done deal, the G-Nats were closing the gap between 3rd and 1st place with five straight wins when rain and then Hurricane Dorian cancelled the rest of the season. Instead, they finished 1½ back for just the fourth winning season in the ’10s*.
* I suspect some folks will never stop pronouncing it two-thousand-[number] and it will be a dead giveaway to their age.

While being just a shade over the league average (19.6 vs. 19.4) the G-Nats had the fourth-best offense in the league (5.08 R/G; Lg. Avg: 4.48), largely powered by the trio of Leandro Emiliani, Junior Martina, and Viandel Peña, who hail from Colombia, Curaçao, and the Dominican Republic.

Like 2018, the average age of the pitchers (21.5; 20.3) is misleading as nearly two-thirds of the innings pitched were thrown by pitchers aged 20 or younger, more than half by 19 or younger. But also like 2018, the too-young-to-legally-drink cohort struggled at run prevention, with almost a full run’s difference between earned runs and total runs allowed (3.81 vs. 4.73).

With the obligatory reminder about the “shorties” and the long odds for these prospects to make it to High-A, let alone past High-A…

For both the pitchers and the batters, the top three were very close calls. You could be like the official scorekeeper was at the Pfitz and shake a Magic 8-ball to make your decision, except you wouldn’t be as wrong.

Leandro Emiliani was repeating the league… at the age of 19. Junior Martina was old for the level at 21, but was in his first pro season. Viandel Peña, who was statistically a shade worse than both at OBP and SLG%, gets the nod because he was just 18, though you have to wonder how small he really is if he’s listed at 5’8″ and 148 lbs.

For the pitchers, all three are teenagers. Jose Ferrer was still a strikeout machine (and a southpaw) but the walks rose (3.3 to 5.4) twice as much proportionally as the K’s dropped (15.9 to ~10.0). Eddie Yean turned 18 the day before the GCL started and was the only starter of three, leading the team in IP though he gave up a fair amount of HRs relative to the league. Thus the #1 pick goes to Bryan Peña, who was a reliever but put up strong peripherals (10.4K, 3.4BB).

As always, folks who want to pore over the numbers themselves, can find them here and the FIP data here.