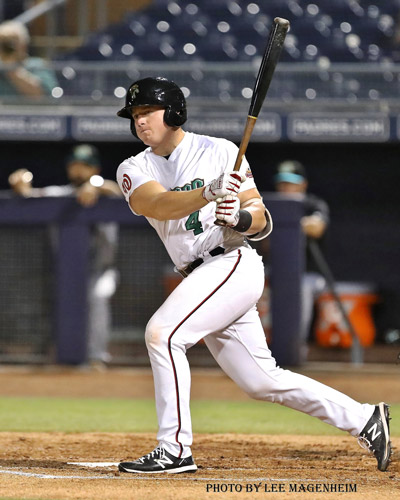 The Javelina pitchers walked seven but struck out 14 and nearly won this anyway. Instead, Surprise finally broke through with a one-out HR from Royals prospect Brewer Hicklen to edge Peoria, 2-1.

Luis Garcia returned to the lineup in his usual slot (No. 2) and in the field at his usual spot (shortstop). Garcia reached on an error in the 1st, walked to lead off the third, and doubled to lead off the 5th. He was thrown out trying to steal third and finished the night 1-for-4. Defensively, he had two assists, including the turn on 1-6-3 DP.

Jakson Reetz (pictured from Friday) was the only other National to appear in the game. He caught and batted cleanup, going 1-for-3 with a walk and a stolen base, one of six the Saguaros racked up on the night. He failed to throw out the lone runner who tried to steal but made 11 putouts, including a play at the plate on the delayed steal from third to home.

Today is the first of seven scheduled off days this AFL season. Peoria and Surprise will swap unis but stay in the same stadium as they rematch tomorrow night. While not officially listed, it would appear that Sterling Sharp will make his second start.