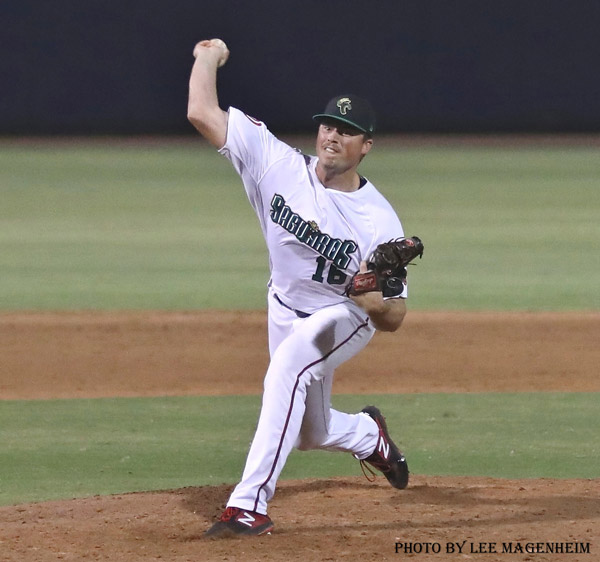 The Saguaros continue to roll in the AFL, as they took their fifth straight, 6-2 over the Javelinas.

Jakson Reetz, the Sagauros DH, went deep for the first time this fall with a solo shot to lead off the Surprise 2nd, in which the Saguaros took an early 3-0 lead. Alas, it would be the only hit for the Nats’ hitters as Luis Garcia, hitting second and playing short, went 0-for-5. Garcia had one assist and tagged out a would-be basestealer.

Nick Raquet was the first man out of the Surprise ‘pen, but was ineffective in his third appearance. The 23-y.o. southpaw gave up two runs on two hits and three walks over an inning and two-thirds while fanning just one. Andrew Lee (pictured above) stranded two while getting out of the 5th and put up goose eggs in the 6th and 7th. The 25-y.o. northpaw fanned five and gave up two hits but issued nary a walk.

With the win, Surprise sits atop the AFL West at 6-1. Tonight, they travel to Mesa to see how they’ll play outside Peoria.

GARCIA NAMED TO BA’S EASTERN LEAGUE TOP 20
While I’m sure some folks will be upset at how low he came in on the ranking (#16), I’ll fire the pre-emptive shot and remind them (1) AA is where the best talent is these days (2) Garcia hit only four HR’s and drew just 17 walks. He made the list quite simply because he is only 19 and because scouts believe he’ll be an everyday major-leaguer. Like Carter Kieboom, there are doubts that he can stick at shortstop because of a “thick lower half.” [Insert Sir Mix-a-lot reference here] Unlike Kieboom, the scouts like his arm, and obviously the Nats agree as they opted to put him at 3B when both he and Yasel Antuna were in the same infield in Hagerstown last year.

NATIONALS NAME 2019 MINOR LEAGUE AWARDS
As noted in the comments, the Nationals unveiled their 2019 minors awards and expanded the list by two:

While not the September call-up that would have been more appropriate, especially in the final year of no restrictions, Hernandez finally gets some recognition and perhaps some love from the MASN commenters. No arguments aside from what the slash-through joke ought to make clear: the extra awards are exactly that.