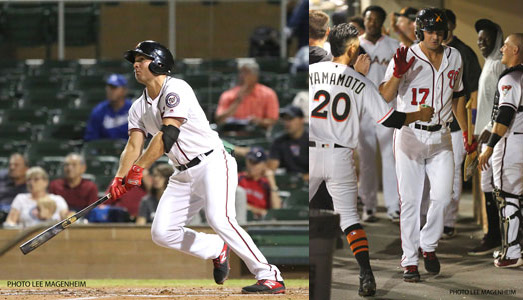 Salt River wasted no time getting back on the wat..er, winning track as they dropped five in the 1st, capped off by an Earl weaver special from Jake Noll (pictured above), and cruised to a 12-3 win over Mesa.

Noll, who also singled in the 3rd, drove in four total to hit safely in his third straight game. Alas, he also committed his second error. After seven games, he’s 5-for-29 with a double, a HR, and eight RBI.

Carter Kieboom was the second of two Nationals to appear in the Rafters’ lineup. He had his third three-hit game over the last week, going 3-for-5 with an RBI and a run scored. In 12 games, he’s posted a line of .310/.463/.429 with a homer, a triple, and four RBI.

Kieboom is one of two Nationals who were named yesterday to this Saturday’s “Fall Stars Game,” which will be broadcast on the MLB Network and streamed on MLB.com. Joining Spencer’s younger brother on the AFL East roster will be Ben Braymer.

The third-place Solar Sox and first-place Rafters rematch this afternoon in Mesa.