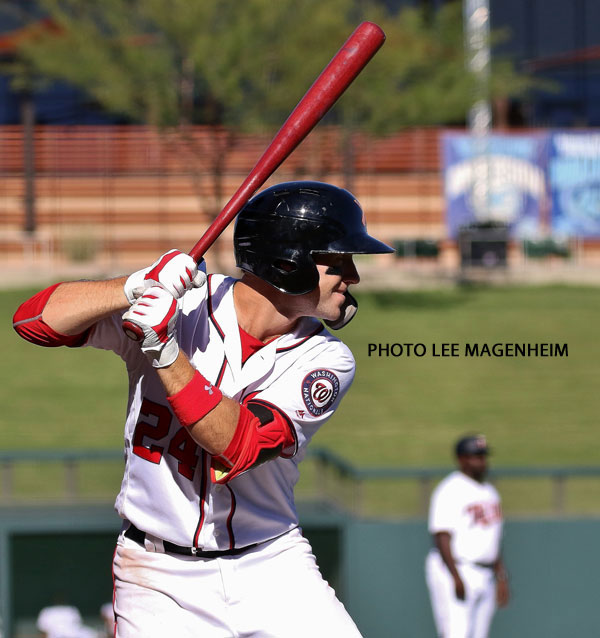 Luis Reyes reverted to his first-AFL-start form as he was lit up for six runs in the 2nd, which proved to be the difference in Salt River’s 11-6 loss to Peoria.

Reyes coughed up two homers and six hits total while retiring four of 11 batters faced. He walked one and struck out none while taking his second loss of the fall.

Carter Kieboom (pictured) remains red-hot as he went 3-for-4 with a walk and a whiff while starting at second base and playing the last three and 1/3rd innings at shortstop. Defensively, he had one putout and one assist, both at 2B.

Tres Barrera was the catcher and went 1-for-3 with a sac-fly RBI and a run scored, but also committed an error and went 0-for-2 trying to throw out basestealers.

Daniel Johnson started in CF and got his third hit in 34 at-bats and his 11th, 12th, and 13th strikeouts. He made three putouts and threw out a runner at the plate for an 8-2 DP to end the 8th inning.

Despite the loss, the rafters remain in 1st place by a game at 9-7. This week, they’ll play home-and-home against Mesa and Glendale and visit Surprise on Friday. Saturday is the Fall Stars game, for which rosters have not yet been announced.