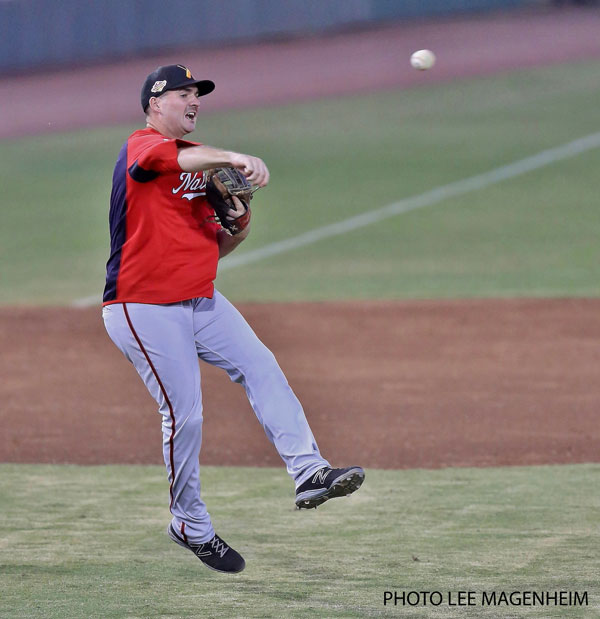 Just one Nats farmhand got into yesterday’s AFL game, which Salt River won, 9-2. Jake Noll (pictured during warmups) batted third and played third base and pushed his batting average onto the Interstate (.120) with a two-run double while going 1-for-5 with a run scored.

The win improved the Rafters to 9-6 and sole possession of 1st place in the AFL East, albeit by one game. Luis Reyes is scheduled to start this afternoon against the Javelinas.

WINTER LEAGUE UPDATE
Still pretty early, but no need to reinvent the wheel – Byron Kerr has the deal on how the guys have done so far in the DWL.

In the MWL, David Goforth is the only pitcher to have appeared more than once, winning one game while blowing a save and posting a 2.70 ERA in six games (6⅔ IP). Hagerstown catcher Alejandro Flores has gone 3-for-17 in five games.

HARRISBURG SENATORS
The Senators were the only team with a winning record (72-65) to not make the playoffs in the Eastern League. The same is also true for the seven Washington Nationals affiliates.

Translated to the 162-game MLB standard, that’s an 85-win team: good enough to make things interesting, but not good enough to do much in the playoffs – especially since the powers that be have made it much harder for the next ’87 Twins or ’06 Cards. That’s not bad until you realize that, once again, the team’s hitters were the third-oldest in the league and the pitchers were the oldest.

Thus, the streak of a single, unranked list extends to seven seasons in a row. And that’s looking the other way on guys too old to register for Selective Service:

Honorable mention goes to Hunter Jones who had a .267 GPA (lg. avg. was .244), though he turned 27 in August. Likewise for Jefry Rodriguez, who graduated from prospect status by virtue of pitching so many innings for the parent club, which kind of renders his below-league-average production (3.31/3.68/1.22 in 68IP) moot.

Folks who’d like to see the full team’s stats can find them here.