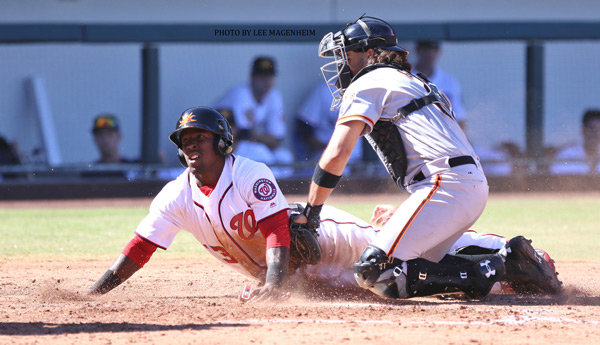 Scottsdale built a 4-1 lead midway through yesterday’s tilt against Mesa but a four-spot in the 6th and a grand slam by former National farmhand Sheldon Neuse in the 7th powered the Solar Sox to a 9-8 win.

Kyle McGowin got the start, but was knocked around for three runs (two earned) on six hits over four innings. He walked none and struck out six.

Austen Williams was the first man out of the Mesa ‘pen, but wasn’t much more effective as he allowed one run on two hits and a walk over two innings. He was the pitcher of record when the Solar Sox rallied and got credit for the win.

Jimmy Cordero also made his first appearance, working around two hits in a scoreless 8th inning while striking out one.

Daniel Johnson (pictured above; he was safe) got the start in centerfield and went 2-for-4 with a triple and scored twice. Defensively, he made one putout.

Taylor Gushue was behind the dish and threw out two of four runners trying to steal, though he committed an error and racked up 10 putouts. To the left of the plate, he went 1-for-4.

Mesa plays Peoria over the next two afternoons with a home game today and in Peoria tomorrow.