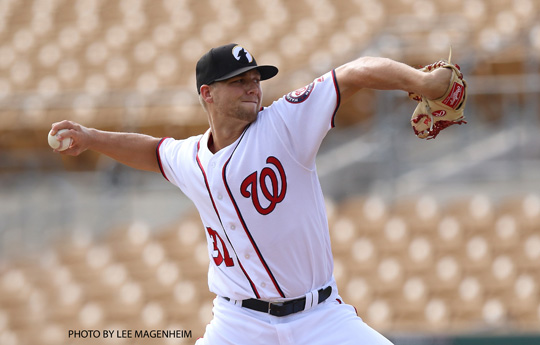 The Desert Dogs avoided the shutout with a second-inning run but not the loss, as they dropped a 4-1 decision to the Rafters yesterday afternoon.

Austin Voth (pictured) made his fourth start this fall for Glendale. He gave up four runs on just two hits, but both were home runs – a two-run shot in the 1st, then another in the 4th. Both longballs were preceded by a hit batsman.

Voth threw 74 pitches, 41 for strikes, over five innings. He walked two and struck out two while suffering his second loss, but actually lowered his ERA to 10.43 for the AFL campaign.

The two teams switch venues for this afternoon’s game to finish out the third week of the 2016 AFL season.

TRANSACTION UPDATES
• Fans of “The Onion” need not shed any tears, as the Nationals have re-signed C Jhonatan Solano.
• RHP Aaron Barrett was outrighted to Syracuse on Tuesday and he elected to become a free agent
• OF Yadiel Hernandez was placed on the Hagerstown Suns roster, which means… well, nothing since this is the offseason
• Likewise for P Thony Amoroso, though it’s nice to think that the recently signed IFA from Venezuela may bypass the DSL in 2017

AUBURN DOUBLEDAYS FOR SALE
While this isn’t news per se — minor-league teams are bought and sold all the time — what is unusual is that both the Doubledays and their facility are city-owned. And like many businesses in upstate New York, they’re losing money. Thus, Auburn is looking to sell.

This is the fiscally right thing to do, as the local media notes in an Op-Ed that urges the city government to be transparent as it does so — unlike their counterparts in Northern Virginia.

THE HARRISBURG SENATORS
A lot of folks obsess over how a farm system is ranked relative to the other 29 teams in MLB, but where it really matters can be boiled down to two questions: (1) Does it produce players that can play? (2) Is there enough depth to sustain injuries?

Obviously, we know the answer to both of those questions. But what’s less obvious is the effect that has on the minor-league teams, especially in the upper minors where there’s not a half system. The 2016 Harrisburg Senators were an example of the roster churn that ensues as 50 players suited up (not counting MLB rehabs) and a dozen pitchers made five or more starts.

Indeed, it was that pitching that carried the team as the E.L.’s third-best staff (4.16 R/G vs. 4.34 Lg. Avg.) was able to withstand the E.L.’s second-worst offense (4.01 R/G) and nearly made the playoffs anyway. Though it should be noted that the Eastern League was similar to the Carolina League in that just six of the 12 teams had winning records and two teams were over the .600 mark.

For the fifth straight season, however, the Senators list is combined into a single Top 5:

OK, before you rip into me about Tyler Mapes, who’d probably #6 if I were to go further, take a look at his K rate (4.53). That’s more than two full whiffs per 9IP than the league average. Coupled with nearly a hit per IP for his career… that’s just too much contact to succeed long-term at AAA or higher. And I’ve seen it before.

To be honest, after Lopez and Giolito, it’s pretty dicey. Bostick didn’t exactly light it up at AAA and is no longer a National. Simms, like Mapes, will be entering 2017 at age 25 (though he’s six months younger). Bautista, despite all that speed, had just 20 extra-base hits and just 12 doubles.

As always, folks who wish to see the full team stats can find ’em here.