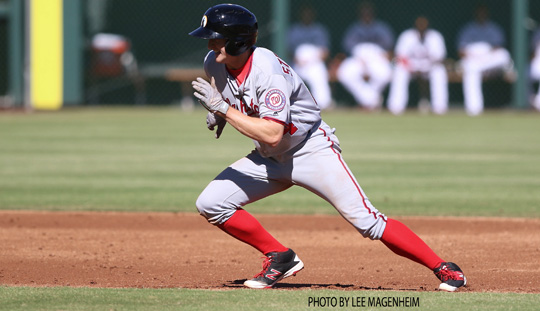 Powered by Andrew Stevenson’s three hits and three RBI, Glendale doubled up Salt River, 6-3 for its sixth win of the season.

Stevenson, who batted second and played CF, doubled twice and singled once while scoring a run in four trips to the plate. He also stole his fourth base (pictured) and made one putout.

Drew Ward and Osvaldo Abreu were also in the starting lineup for the Desert Dogs.

Ward played 1B and extended his hit streak to 11 games with a leadoff single in the 6th. Defensively, he committed an error but made 10 putouts.

Abreu was hitless from the No. 7 slot and handled all four defensive chances in the field (three assists, one putout).

Jake Johansen set the side down in order in the 6th for a hold and his fourth straight scoreless outing.

It’s a shorter week this week with the Fall Stars game on Saturday. Rosters will likely be announced tomorrow.