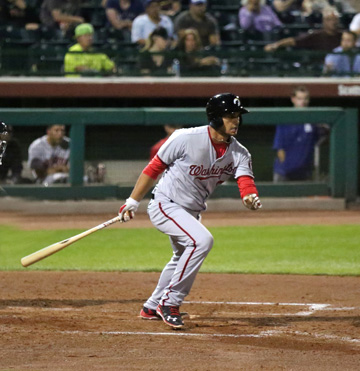 Glendale scored in each of the first four innings to build an 8-1 lead and cruised to 12-4 victory, its fourth of the AFL Season.

Two Nationals batters appeared in the game (spoiler alert, one of them is pictured).

Andrew Stevenson led off and played left field. In six ABs he singled, tripled, scored twice, and drove in a run to push his AFL batting average to .267. In the field, he had four putouts and fielded the ball six times total.

Drew Ward (*ahem*) singled twice, walked once, doubled once, struck once, and scored thrice. Hr drove in a run and committed error, but is hitting an Nintendo-esque .448/.529/.517 in eight games thus far.

The Desert Dogs return home this afternoon to host Surprise.