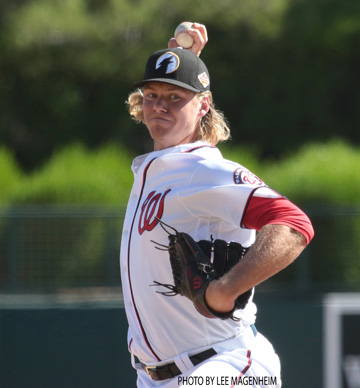 The Desert Dogs couldn’t make it two in a row as they were shut out by the Saguaros, 4-0.

It was another busy day for the Nats, as four players saw game action.

Drew Ward hit safely for the ninth time with a 5th-inning single as part of a 1-for-4 afternoon with a whiff. In the field, he had a putout and two assists and no errors.

Andrew Stevenson started again in left field and got the first of Glendale’s four (4) hits with a two-out single in the 3rd. He stole second for his third swiped bag of the fall. Defensively, he made just one putout.

Jake Johansen (pictured) turned in his third straight scoreless outing, stranding a single in his first inning and denying a double in his second inning of work to lower his fall ERA to 1.17 in seven and 2/3rds innings total.