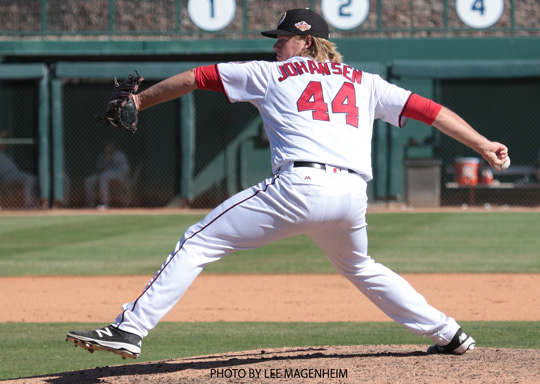 A two-out steal of third in the bottom of the 8th changed from dumb baserunning to a genius move when the Mesa catcher threw it away. That proved to be the gamewinner in a 3-2 win by Glendale that snapped a five-game losing streak.

It also made a winner out of Ryan Brinley, who pitched two perfect innings in the 7th and 8th with two strikeouts. He threw 20 pitches, 13 for strikes to maintain his 0.00 fall ERA.

Jake Johansen (pictured) also made a relief appearance, pitching a scoreless inning and 2/3rds. He stranded a runner in the 4th and worked around an error in the 5th. He walked one and struck none on 22 pitches (nine strikes).

• Osvaldo Abreu led off and played shortstop, but went 0-for-4 with a strikeout. He committed the aforementioned error, but also took part in two double plays
• Drew Ward played 1B and made nine putouts without an error in the field while going 1-for-4 with two strikeouts at the plate.

The Desert Dogs finish the week with a pair of afternoon road games in Peoria today and Surprise tomorrow.