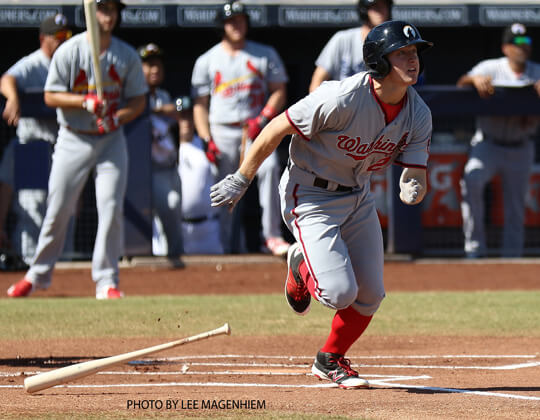 Glendale reverted to its losing ways as they didn’t play well in Peoria and lost 8-2 for its sixth loss in the last seven games.

Andrew Stevenson (pictured) was the sole National to appear in the game. He led off and played centerfield but was 0-for-4. Defensively, he made three putouts and fielded five balls total.

Austin Voth is slated to start the final game of the week for the Desert Dogs, an afternoon road game in Surprise.

THE POTOMAC NATIONALS
If you’re a fan of “narrative” and superstition, then Potomac’s “even year” streak ended with a first-round exit to Lynchburg, a team they had taken out in the first round twice previously since the playoff format changed from best-of-five to best-of-three in 2013. However, as a P-Nat season-ticket holder (disclosure ☑), this year’s team seemed to be short of the mark of previous championship teams.

Of course, it didn’t help that the 2016 Carolina League felt like a second-tier collegiate football conference. The gap between the playoff teams and the non-playoff teams was huge, thanks to three of the eight teams winning 80+ games. The four playoff teams were the four teams with a winning record.

Which is not to say it wasn’t a team worth watching: Erick Fedde shook off a rough start and went on a tear. Drew Ward repeated the level and started very strong, slipped a little, then played well enough to get the bump. Andrew Stevenson came as advertised and was replaced by another hot prospect who also lived up to the hype. Jose Marmolejos was the steady Eddie he’s been for his entire career.

About the only complaint might be that there wasn’t enough age-appropriate pitching, but that’s nitpicking. It’s happened before and to a (much) greater degree.

Avoiding repeats was the challenge here since three of the Suns’ Top 5 might have been named here, too. While I’m still not a fan of Raudy Read’s defense, I can understand that if he can improve to passable, that bat could develop into something that every team wants: a catcher that can hit. Abreu did finish the season strong (.311/.366/.447 in last 33G) and does have the tools to be a good shortstop. Add that to an AFL nod, and that’s enough for me to put him onto this list.

The bevy of relievers, including one repeating the level, should hardly come as a surprise given the number of innings thrown by guys who no longer have to register for Selective Service (270⅔ excluding rehabs and position players).

Folks interested in seeing the full team’s statistics can find them here.