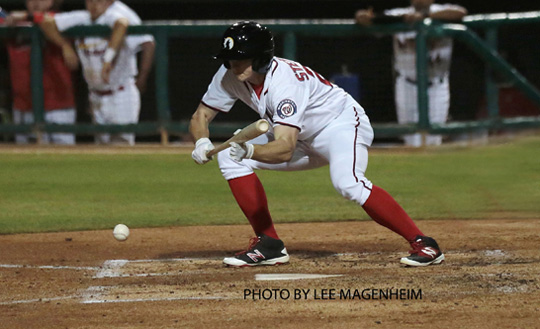 The Desert Dogs rallied to tie with a two-spot in the 5th but had no answer for the Rafters’ two-run rally in the 7th as they dropped their fifth straight, 4-2.

Drew Ward and Andrew Stevenson were among the starters while Nick Lee appeared in relief.

Ward batted second and played 3B and reached base twice with a walk and an RBI single while striking out once in four plate appearances. In the field, he made two assists and did not commit an error.

Stevenson batted ninth and played LF. He bunted his way on (pictured) in the 3rd and stole second, doubled in the 5th with two outs, then scored on leadoff man Ramon Laureano’s double. Defensively, he made two putouts, including a crash into LF fence in foul territory to end the 5th.

Lee was the first man out of the Glendale ‘pen and worked around an infield single for a scoreless inning of work. He threw 11 pitches, six for strikes and did not walk a batter.

The Desert Dogs stay at home for an afternoon game today against the Solar Sox.