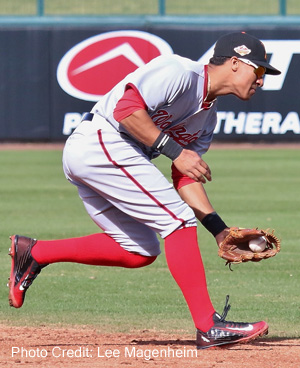 The Solar Sox posted a picket fence to take a 3-1 lead in the middle innings, then put the game away with a three-spot in 6th for a 6-1 win over the Rafters.

It may seem like all Christopher Bostick, all the time, but when he’s the only National to appear in the game…

Bostick once again batted second and played second base. At the plate, he was 0-for-2 two with two walks drawn and stole a base, his sixth of the fall. In the field (pictured), he had a putout and three assists, including the pivot on a 6-4-3 double play.

The 2015 AFL season concludes for the Salt River Rafters with an afternoon game against the AFL East champion Scottsdale Scorpions.