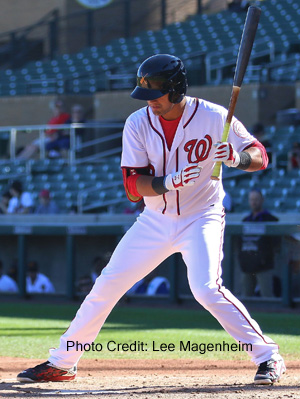 The Salt River Rafters scored single runs in the 2nd, 3rd, 5th, and 7th innings and withstood a late rally from the Scottsdale Scorpions finish the 2015 campaign with a 4-2 win.

As you might have guessed, just one National got into yesterday’s game: Drew Ward (pictured).

The turns-21-next-week Oklahoman was the designated hitter but did not get a hit. He struck out three times in four plate appearances, but did draw his 11th walk in 12 games this fall (versus nine K’s). He finished with an average of just .097 (3-for-31), but had a respectable on-base percentage of .326.

Salt River finished the year 16-13, 1½ games behind Scottsdale. With that the 2015 season — the sixth this site has covered — officially comes to a close.

In what now seems rather anticlimactic, last night the Nationals added three from this year’s AFL contingent to the 40-man roster: Christopher Bostick, Spencer Kieboom, and Nick Lee.

A common thread through all three picks is the shoring up organizational depth. With the departure of Ian Desmond and the continued fragility of Anthony Rendon, the Nationals will need a backup to the backup of Wilmer Difo for 2016.

Kieboom is also an addition to a catching corps that has been thinned by trades and the Rule 5 draft over the past few years. Like Bostick, he’s the backup to Pedro Severino.

Lee, of course, is a bit of a surprise given that he’s already been passed over for the Rule 5 and a good but not great 2015 regular season. But he’s still lefthanded and throws strikes (though he has yet to tame his tendency to issue walks) and will be the backup to Matt Grace as a situational southpaw.

As for projections, it might be safe to say that this trio will be teammates in Harrisburg next season with the players in front of them moving up (or returning) to Syracuse. But there’s a long offseason to go and Washington has a GM that “kinda, sorta” likes to make trades.