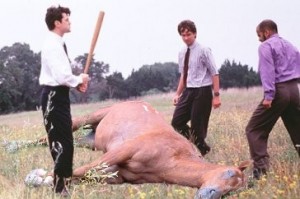 As the year prior, the lion’s share of the Doubledays roster was 2012 draftees — seven of the top 12 batters in terms of PAs, five of the top 12 pitchers in terms of IPs. This, of course, is a product of the Washington focus on drafting collegiate players (26 of 40) in general and seniors in particular (16 of 24 signees). Not to, um, beat a dead horse, but my stance from last year that the Nats should consider drafting more HS players in light of the large number of 22-24-y.o.’s in the system remains the same.

That the parent club is now in a window of opportunity that has come sooner than most reasonable people would have expected (most of the “Natmosphere” pegged them winning about 85-87 games) solidifies that opinion. In other words, the organizatiom can afford to spend more time developing a hidden gem rather than playing it safe and hoping that a collegiate player can be pushed from a serviceable backup to an everyday player.

Continuing with our format, let’s examine how Auburn compared to the rest of the N.Y. Penn League…
HITTING

Like last season, the 2012 Auburn Doubledays could hit, leading the league in runs scored, hits, and batting average and were second in on-base percentage and slugging. They weren’t quite as proficient in stealing bases in terms of quantity, but were successful nearly 79% of the time, a slight dip from last year’s insane rate of 85.5 percent.

On the flip side, however, the pitching needed all that offense because it wasn’t up to snuff: 10th in runs allowed and hit batsman, 13th in ERA and home runs allowed, 14th in hits allowed. There are a couple of caveats worth noting. Just two starting pitchers were below league-average in terms of ERA, though it should be noted that a couple pitchers had huge ERA-FIP differentials, which is not uncommon in short-season ball, and roughly a half-dozen pitchers had better than a 3:1 strikeout-to-walk ratio.

I’m listing the Top 13* hitters and pitchers in terms of plate appearances and innings pitched and using defensive games played for the listing of position. The full statistics for the team can be found here.
(# = 2011 Draft Pick   ** = DSL Graduate)   *One extra because the #13 guy on both lists is worth noting 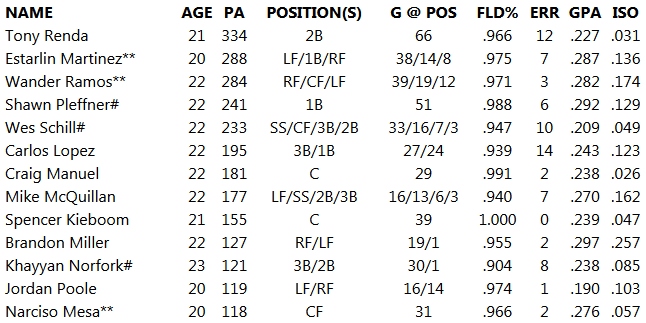 There is really little to complain about when it came to the offense — 10 of these 13 were above league average in GPA (link for those unfamiliar) and seven had isolated power rates (likewise) above the norm. Yes, you can write off some of this in the aggregate to age, but this was true last year and that carried over to Hagerstown this year (as predicted).

Defensively, the team was middle-of-the pack with one rather notable exception: catchers. Kieboom and Manuel (along with third-stringer Andruth Ramirez) combined to throw out 45% of the runners that attempted to steal against them and allowed a league-low 38 in 76 games, which is phenomenal when you consider how many opportunities teams had to run against them. Plus, the trio committed just six errors (four by Ramirez) for an aggregate fielding percentage of .991.

It’s not all sunny though, as we move along to the pitchers… 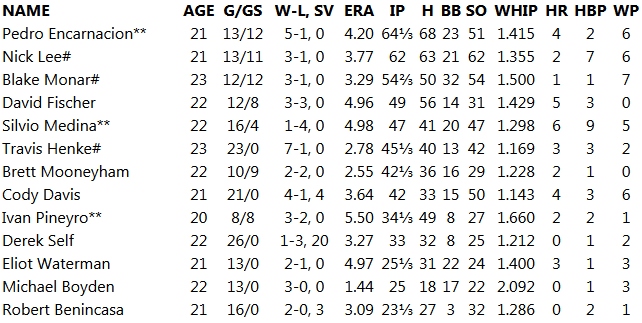 To be sure, there are some bright spots to be found here. Robert Benincasa’s outstanding walk and strikeout rates (1.2 BB/9and 12.3 K/9 for a ratio of 10.67 to 1) Derek Self’s 2.50 FIP, Nick Lee and Blake Monar’s HR rates (0.29 and 0.16 respectively). But you can also see a some high walk totals and as aforementioned, the team gave up the second-most HRs in the league. There are also quite a few innings there thrown by middle-relief/swingmen that had ERAs close to 5.00 (121⅓ between Medina, Waterman and Fischer, which sounds like a law firm, doesn’t it?).
OBLIGATORY TOP FIVE LISTS
For the third straight year, I was able to make it to an Auburn contest, albeit a single game in Aberdeen. Still, this mostly sight-unseen, like the GCL and DSL and prone to the same problems that lead to the same misjudgments in rankings. For example, I put Bryce Ortega ahead of Matt Skole last year and didn’t rank Nathan Karns as a Top 5 for Auburn (though in my defense, Karns had a WHIP of 1.473 over eight starts after blowing through the GCL). So I expect to be wrong on a couple of these, too (hence the honorable mentions, natch).