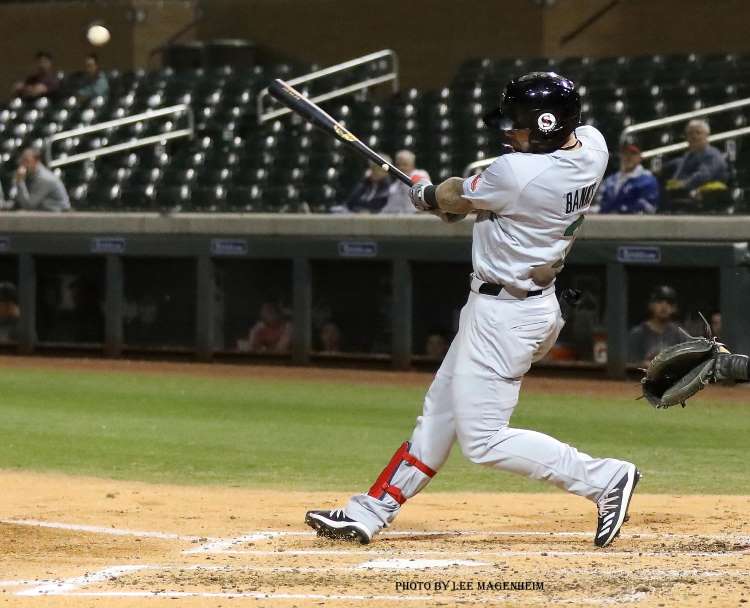 Beginning with a two-run double off the bat of Nick Banks (both pictured above), the Sagauros broke up a Star Trek convention in the top of the 4th with four runs, then stung the Scorpions with six more in the 5th as they stopped a four-game losing streak with a 10-2 win last night in Salt River.

Cole Freeman also appeared in the game as the Sagauros left fielder, batting ninth. He ended the four-run binge in the 4th with a two-run single. An inning later Freeman drew a four-ball free pass* with the bases drunk for this third RBI. In the field, he snagged a flyout and fielded a single. Freeman’s line is now .214/.292/.238 in 14 games. * Just a reminder: There are eight different ways to reach first base—nine if you count “buy ’em a drink”—and four don’t require the ball to be put in play

Surprise finishes its regular-season slate with an afternoon game against Glendale. Tomorrow, the Sagauros play the Rafters for the AFL Championship.

FREDERICKSBURG RELEASES 2020 SCHEDULE
The Fredericksburg Nationals have released the schedule for its inaugural season. Like Fayetteville this season, the F-Nats will begin on the road to allow the most time possible for construction to be completed.

It’s hard not to notice that the first four opponents on the schedule will either be less than two hours away (Keys), or already in Virginia (Mudcats), or will have an off day prior to the beginning of the series (Woodpeckers). This appears to be a hedge by the league should the team have to play elsewhere. It has happened before.

For those of you who don’t live west or south of “America’s Most Historic City,” (that’s Fredericksburg’s motto) there will be 11 Saturday games on the 2020 docket, i.e. games that will have slightly less brutal traffic.

Game times were not released yesterday, but if past is prologue, you can count on most of the 11 (if not all) Sunday games to be during the day instead of at night or twilight despite (take your pick) traffic on 95 or the summer heat.

But if you do go, Fredericksburg does have a great old town and just up the road from the stadium is the Battlefield Country Store, which sells all sorts of goodies as well as sandwiches and ice cream.