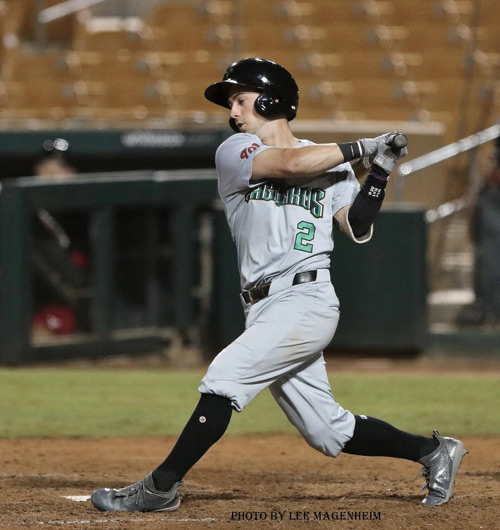 The Desert Dogs put up crooked numbers in three of the first five innings as they doubled up the Saguaros for an 8-4 win.

Nick Banks and Cole Freeman (pictured) were in the Surprise starting line up in right field and designated hitter, respectively.

Banks went 0-for-4 at the plate and fielded three singles, throwing out the first baserunner who tried to stretch it into a double.

Freeman got off the interstate with his second straight two-hit game, as he led off the 6th with a single and doubled in a run in the 7th. However, he struck in his two other PAs.

Andrew Lee made his first appearance since the Fall Stars game and tossed two scoreless innings, thought did walk two and give up a hit. He threw 30 pitches, 19 for strikes.

Nick Raquet’s struggles continued as he gave up multiple runs for the third straight appearance (fourth overall out of seven) with three runs let in on three hits and a walk over an inning, which required 25 pitches to complete.

Peoria also lost to reduce Surprise’s magic number to four. After an off day today, the Sagauros and Desert Dogs will switch venues and rematch tomorrow.

SHARP NAMED AFL PITCHER OF THE WEEK
Five goose eggs on Oct. 8 was enough to earn the honor for RHP Sterling Sharp. MLB Pipeline’s Jonathan Mayo has the story.