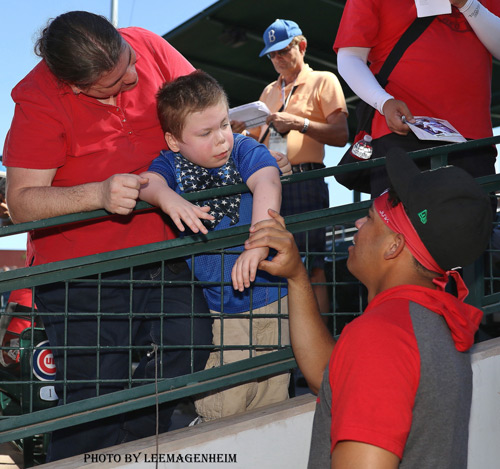 It was a light night for the Nationals contingent as only Luis Garcia appeared in Surprise’s 8-1 loss to Salt River. Garcia was hitless in four at-bats but, as pictured, won the heart of a young fan prior to the game.

The two teams switch venues and rematch tonight. The Javelinas also lost to reduce the Sagauros’ magic number to two.

THE 2019 HARRISBURG SENATORS
The Senators did their best imitation of the 1984 Detroit Tigers as they, um, roared out to a 31-11 record by mid-May. They played sub-.500 baseball the rest of the way (45-52), winning the first half by just five games. Even without the half system, they may have still made the playoffs, in which they lost three games to one to the Bowie BaySox.

Injuries and player turnover had a lot to do with this, though you could argue that that was somewhat offset by the likes of AAA/AAAA talent being parked there to compensate for the usual spot for 40-man callups being moved from upstate NY to upstate CA.

Thus the team, which has traditionally been among the league’s oldest thanks to the Nats’ propensity for drafting collegiate players and GM Mike Rizzo’s fondness for using MLFAs interchangeably between AA and AAA, was the oldest by nearly six months for both pitchers and batters. Consequently, this lead to an unranked list of eight players for the eighth straight season:

Like Potomac, I probably made this list bigger than it should be (eight instead of six), but then I would have had to have double honorable mentions because the line is that fine. Those go to Ben Braymer (3.37 FIP) and Rhett Wiseman (.197 ISO). Braymer, Sanchez, and Crowe all struggled at AAA, which I’m sure someone may point out is attributable to the PCL’s park factors, though that doesn’t exactly explain the Brobdingnagian jumps in walk rates.

It’s also worth noting that Drew Ward will become a free agent if he is not added to the 40-man roster. I would not put it past Rizzo to do so in hopes of being able to include Ward in a trade (see: Souza, Steven), which may explain his being used primarily at 3B in 2019 though his range still remains that of Daisy air rifle.

Folks who’d like to see the full team statistics can find them here. Pitching data can be found here.