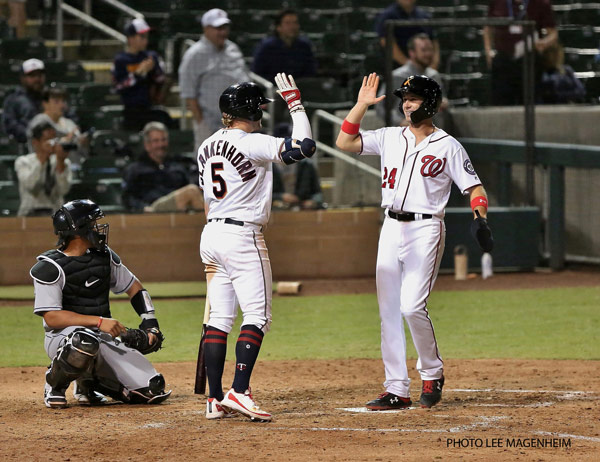 It was a Star Trek convention in regulation and a disaster in extras, but the Rafters didn’t lose, 2-1 in 10 innings against the Desert Dogs.

The two teams each collected three hits through the first nine innings. Glendale’s fourth, a double with one out, plated the free runner in the top of the 10th for the game’s first run. A passed ball put the insurance at third, but Kevin Ginkel bore down and got the second and third outs to keep the score 1-0, Glendale.

Carter Kieboom led off the Rafters’ 10th with a walk, took second on a sacrifice, third on grounder hit too slowly for a double play (and scored the tying run), and strolled in (pictured) on a balk for the “walkoff” 2-1 win. The two teams combined for two walks, a wild pitch, a passed ball, and a balk in the 10th.

Kieboom started and played short but was 0-for-3 prior to the 10th. Daniel Johnson led off and played center but was also hitless at 0-for-4.

All three Nats relievers got into the game:
• Ben Braymer was the first man out of the ‘pen and went two scoreless with a hit and four whiffs. He did not issue a walk.
• Taylor Guilbeau came on with two runners on in the 6th and was credited with 1/3 inning pitched when Glendale’s Thairo Estrada was gunned down at home on a 2-6-2 putout. He then worked a 1-2-3 seventh.
• Jordan Mills tossed two perfect innings and struck out three.

The win preserved a three-way tie in the AFL East while Glendale remains winless at 0-8. The two teams will play today in Glendale for a (gasp) day game.