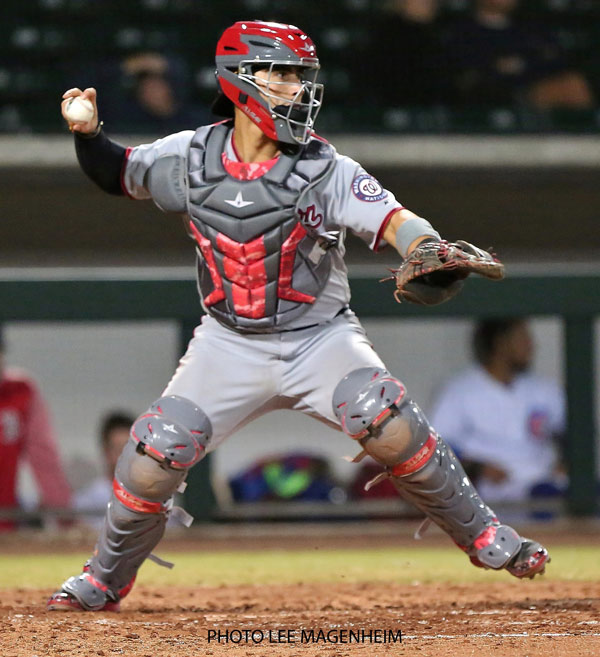 Tres Barrera (pictured above from Tuesday night) was the sole Nationals prospect to appear in yesterday’s gam in the AFL, which saw the Salt River lose 1-0 to Glendale.

Barrera went 0-for-3 with a strikeout but threw out the only runner who attempted to steal. The Rafters finish up the week with another afternoon game as they play the Javelinas.

THE POTOMAC NATIONALS
After an extremely disappointing 2017, the P-Nats rebounded to form and were a few games above .500 in both halves, which was good enough to win the first half and take second place in the second half. Despite having the league’s second-best pitching and second-best hitting, the team underperformed its Pythagorean projection by nine games (83-53 vs. 74-62). It wasn’t defense either: Potomac was third in fielding percentage and second stolen bases allowed.

In the playoffs, the P-Nats fought to a 3-2 series win over the Lynchburg Hillcats despite the Carolina League’s efforts. In the southern division, the Winston-Salem Dash, which won both halves, were swept by the Buies Creek Astros in three games.

Rather than declare co-champions (like they did in 2017) or move the series to a neutral site, away from the path of Hurricane Florence, the Carolina League once again made an arbitrary decision and reduced a best-of-five Mills Cup to a one-game coin flip, which the Buies Creek Astros won, 2-1 in 11 innings to the delight of dozens of fans.

Offensively, the team was carried by a mix of true prospects and 24-25-y.o.’s that probably should have been socially promoted to AA but likely weren’t because, as we saw last week, there weren’t any players from Hagerstown ready to replace them. While the organization has no problem signing indy-league pitchers to plug gaps such as these, position players aren’t nearly as common. That’s important to keep in mind before you marvel at their production.

On the mound, Joan Baez was the stalwart as he led the team in IP and GS. And for the second straight season, he was an enigma who seemed to be figuring it out at the end of the season. That’s good enough to make the watchlist – if you saw him throw, you’d understand why he gets so many chances: 95 and it looks like he’s playing toss – but not the Top 5’s below.

Indeed, three of the five pitchers were bumped up to AA with mixed results: James Bourque put up even better numbers, though in a small sample size. Sterling Sharp had a few quality starts and a few not-so-quality starts. Wil Crowe, who won 11 games and had a 2.79 ERA, had his mediocre peripherals (3.60 FIP, 3.1 BB/9, 8.1 K/9) at High-A highlighted by AA batters for an 0-5 mark in five starts (though he did go seven in his penultimate outing).

Thus, adjusting for age relative to the league, the Top 5’s…

Honorable mentions go to A.J. Bogucki (1.42/2.82/1.23) and Tres Barrera who had a .247 GPA despite having to split time with Jakson Reetz, who was Barrera’s inferior in every category but age and draft position. Statistics for the entire team can be found here.