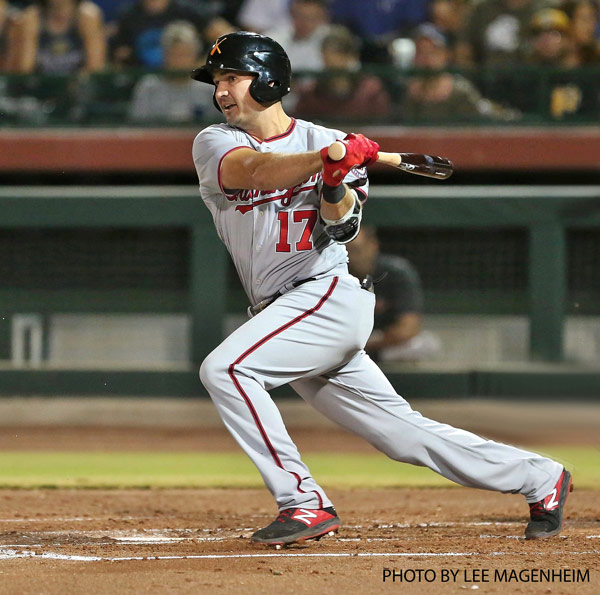 Salt River never led in this one as Scottsdale tripled them up 6-2 last night.

Jake Noll (pictured) was taken out of storage and inserted into the lineup at 3B for his first AFL appearance. He went 1-for-4 with two strikeouts. On defense he had one assist.

Taylor Guilbeau made his second appearance and Shawn Kelley’d the first batter he faced before sandwiching two ground balls around a walk and a strikeout in his single inning of work.

BA TOP PROSPECT LISTS
Baseball America’s Top 20 tour continued with the NYPL, and as mentioned in the comments, Israel Pineda was a surprise mention at No. 9. He also elicited a question in the chat, which got the Crash Davis treatment:

He is certainly young, but has some good tools. Advanced hitter for his age, the ceiling might be an average big league catcher or backup role. Still a ways to go.

THE HAGERSTOWN SUNS
For all the grief we gave Syracuse for its inability to win, the Suns escaped a lot of that wrath despite winning just 52 games – second-worst in Low-A (Burlington, Midwest). They couldn’t hit (12th of 14), couldn’t pitch (13th), and couldn’t field (11th). The only thing they did particularly well was draw walks (1st in the league).

There was a perception that the team was young—no doubt fueled by Juan Soto, Luis Garcia, and Yasel Antuna—but they were actually older than the league average for both hitters and pitchers, thanks to nearly a dozen players aged 23 or older. In many ways, this team was more reminiscent of a Potomac team in which there were a handful of prospects, a handful of maybes, and a bunch of OG’s.

As is the norm with cellar-dwelling teams, I’m combining the list into one and excluding age-inappropriate players. I’ll give it a go with ranking them but your mileage may vary…

Honorable mentions to Cole Freeman, Alex Dunlap and Sam Held, all of whom have turned 24 over the last eight weeks. Those interested in seeing the full team’s stats can find them here.