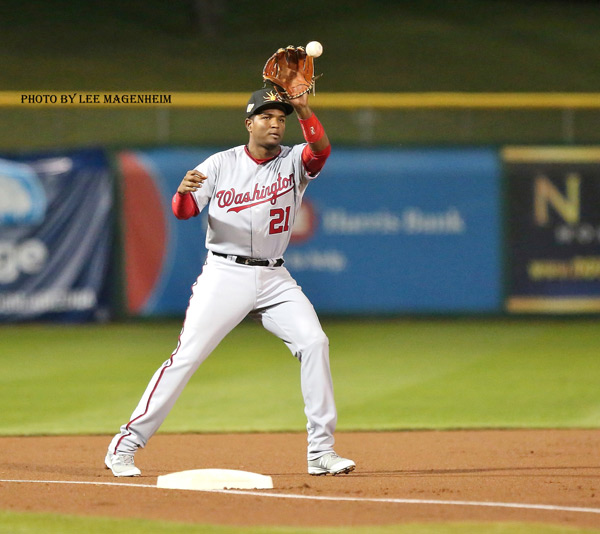 A four-run 6th broke open a one-run game as Mesa doubled up Salt River, 8-4 yesterday in the Arizona Fall League.

Kyle McGowin got the start and the Jack Morris win with two runs allowed on two homers and four hits total over three innings. He walked none and struck out four while throwing 53 pitches, 32 for strikes.

Austen Williams was the first man out of the Sox ‘pen and earned a hold with two scoreless innings. He issued a walk and struck out one while throwing 34 pitches, 21 for strikes.

Victor Robles, who led off and played center field, reached base three times with a pair of walks and… wait for it… a single (you were expecting something else?). He drove in one run on a sacrifice fly and was picked off first.

Kelvin Gutierrez (picture from earlier this month) returned to action with a bang as he tripled in two in his first at-bat and walked in the 6th. He played third base but had no defensive touches.

Taylor Gushue was the designated hitter and lived up the to the title with a 4th-inning, which extended his modest hit streak to three games. He did, however, strike out twice (nos. 11 and 12 in 10 games).

The two teams switch venues for an afternoon game with Mesa playing host. The Solar Sox are on a three-game win streak and have a 1½ game lead in the AFL East.