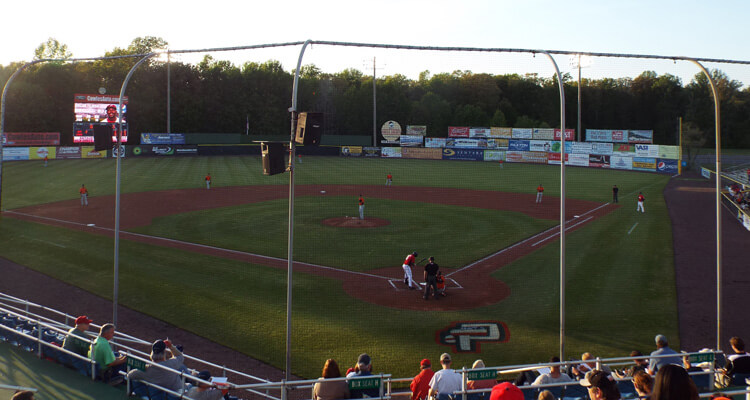 By Walter Triebel, Author of
Road-Tripping the South Atlantic League:
A Guide to the Teams, Ballparks, and Cities

Unlike most of the current Washington Nationals Minor League affiliates, Woodbridge, Virginia, home of their Potomac National advanced A class team in the Carolina League, does not have a long history of professional baseball. In fact, the first season in which a Minor League club played in Woodbridge was 1984. Prior to that season, the Pittsburgh Pirates agreed to relocate their current Carolina League team, the Alexandria Dukes, approximately twenty miles south to the city. A new stadium was built, which was originally called Davis Ford Park, and ready in time for the debut of the Pirates new club—the Prince William Pirates—in their home opening day game of the 1984 Carolina League season.

When the Montreal Expos were relocated after the 2004 season, the team was renamed the Washington Nationals and set up shop at Robert F. Kennedy Memorial Stadium in Washington, DC. As part of that transition, the Nationals changed leagues and/or renamed a number of their affiliates, including switching their High-A club from the Florida State League to the Carolina league to become the Potomac Nationals. Two thousand seventeen is the thirteenth consecutive season that the P-Nats, as they are known to local fans, have been affiliated with the Washington Nationals.

Over the years the name of the stadium also evolved. It was renamed Prince William County Stadium in 1986 and took on its current name G. Richard Pfitzner Stadium in 1995. The ballpark is referred to by locals as “The Pfitz.”

The main seating area of G. Richard Pfitzner Stadium, which is a very simple styled ballpark, is located behind the infield diamond and ranges from dugout to dugout. A narrow walkway traverses this seating section and separates the field-level box seats from a reserved seats section that rises upward from the walkway. A photo of the ball field as seen from the upper section of seats behind home plate is shown above.

Food concessions are located on a small covered concourse that is located behind this main infield seating area. Moreover, there are additional food services, picnic tables, and the team store in an open-air courtyard just inside the entrance gate of the stadium.

Since 2005, a number of players have made a stop in Woodbridge to play for the P-Nats and then advanced to make their Major League debut with Washington or another Major League club. While at the ballpark, check out the Potomac Nationals Wall of Fame in the covered concession area with pictures that honor former Washington Nationals prospects, including Drew Storen, Derek Norris, Steven Strasburg, and Bryce Harper, who played at The Pfitz and later made the jump to the majors.

As mentioned in Parts 1 and 2 of this post, a key goal of the Washington Nationals Minor League Baseball Road Trip is to see some of their 2017 top 30 prospects in action on the ball field at The Pfitz. The table above lists the five Nats 2017 MLB Top 30 Prospects who began the season as members of the Potomac Nationals.

On the 2017 opening day, which was an away game versus the Wilmington Blue Rocks, all four field players were in their starting lineup: Victor Robles (#) in center field and batting leadoff, Kelvin Gutierrez (#16) at third base and hitting cleanup, Edwin Lora (#28) played shortstop and hit eighth, and Telmito Agustin (#26) in left and batting ninth. On the other hand, Joan Baez (#24) made his debut in the P-Nats uniform as their starting pitcher in Game 4 of the new season, an away game versus the Frederick Keys.

As usual for fans of the Suns, Senators, and Washington Nationals, who need to travel a good distance to the ballpark, I recommend attending a day or early evening game. This would potentially allow some pre- or postgame daylight time to explore the stadium and local area. A check of the Potomac Nationals 2017 schedule on their official website shows that they play all of their Sunday home games at 1:05PM and they have one weekday game at 12:05PM in both July and August. Check the travel matrix in Part 1 for an estimate of the travel distance and time for your day trip to the Pfitz.

The city of Woodbridge is located in the northeast corner of Prince William County, at a point where the Occoquan River meets the Potomac River. The P-Nats ballpark is located just six miles and approximately a 15-minute drive from a very interesting historic riverfront villag – Occoquan, VA. I feel that this quaint waterfront village is a “don’t miss” destination on any visit to attend a Potomac Nationals game.

This former mill village is quite small and an ideal destination for a fun side trip. Just park and enjoy walking around the attractive village; exploring some of its interesting specialty, craft, and antique shops, and maybe having lunch or a snack at a riverfront restaurant or cafe.

In the fourth and final part of this post, I will look at the Harrisburg Senators and their stadium FNB Field. Also, I will review the Washington Nationals 2017 Top 30 Prospects on the Senators’ current roster and suggest some travel plans for attending a Senators home game as well as attractions and eateries in or near Harrisburg, PA.