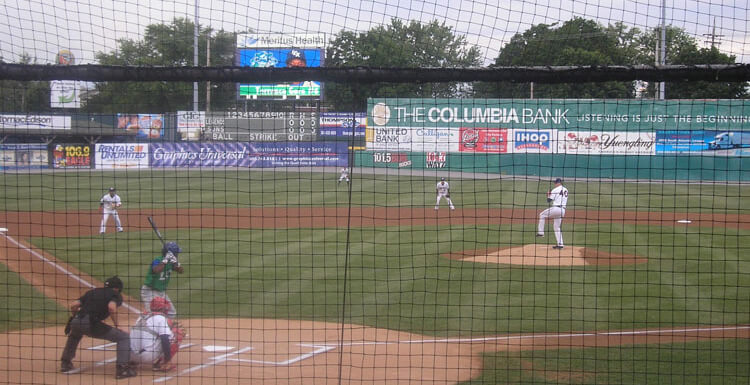 By Walter Triebel, Author of
Road-Tripping the South Atlantic League:
A Guide to the Teams, Ballparks, and Cities

Hagerstown, Maryland has a long history relative to professional baseball and is the home of one of the historic ballparks of the South Atlantic League—Municipal Stadium. Professional teams have called the city home as early as the mid-1890s and the first game played in Municipal Stadium was on May 8, 1930.

Two thousand and seventeen is the thirty-seventh consecutive year that a Suns team has played at the ballpark. Those teams played in the Carolina League, Eastern League, and today the South Atlantic League. During the South Atlantic League years, the Hagerstown Suns have been the Minor League affiliate of the Blue Jays, Giants, Mets, and for the last eleven baseball seasons, the Washington Nationals

Municipal Stadium ranks as the third-oldest ballpark in the United States to be actively used by a Minor League baseball club. The stadium has undergone many renovations over the years and is an old, but quite interesting venue to view a ballgame. The area behind home plate from which the photo above was shot is a classic covered grandstand seating area.

Food concessions and the team store are on a concourse located behind that grandstand. Toward the left field end of the concourse is an area without formal seating that permits you to watch the game from the outfield fence. That is the location of a Beer Garden, which is an interesting area set up with high tables and picnic tables. This is a nice vantage point from which to casually watch the play of the game on the field.

As mentioned in Part 1, a key goal of this Washington Nationals Minor League Baseball Road Trip is to see some of the Nationals top prospects tuning their fielding, batting, and pitching skills on the field at Municipal Stadium. During the Nationals years, a number of future Major Leaguers played for the Suns and advanced to become successful in the majors. For example, both Stephen Strasburg and Bryce Harper were on the roster of the Hagerstown Suns during the 2011 season.

The table above lists the nine Washington National 2017 MLB Preseason Top 30 Prospects that began the season on the Hagerstown Suns roster. The table includes their MLB WSH prospect ranking, position, whether they throw right- or left-handed, bat from the right or left side of the plate or switch hit, the team or teams for which they played during the 2016 season, and the class and league of that/those team(s). For example, right hand hitting right fielder Juan Soto, who is the Nationals’ #3 ranked prospect, played for both the GCL Nationals in the Gulf Coast League (rookie class) and Auburn Doubledays in the New York-Penn League (short-season class A) during the 2016 season. Note that two more of the Nats top 10 prospects, shortstop Carter Kieboom and third baseman Sheldon Neuse are also members of the Suns roster.

In Hagerstown’s 2017 season opener at Municipal Stadium on Friday April 7th, the Suns had seven field players from the MLB.com Nats Top 30 prospects list in the batting order and an eighth as their starting pitcher. The top of their batting order was Blake Perkins (#14) leading off and playing center field, Carter Kieboom (#4) at shortstop and hitting second, Juan Soto (#3) in the number three slot and playing right field, and Sheldon Neuse (#6) at third base and batting cleanup. Meanwhile, left hander Tyler Watson (#17) took the mound as their starter.

As the 2017 season unfolds, Hagerstown Suns and Washington Nationals fans will have the opportunity to see those nine top 30 prospects continue to work on refining their game on the field at Municipal Stadium with the goal of advancing up through the Nationals’ Minor League organization and eventually make their Major League debut.

For Suns fans that live in or near Hagerstown, it is quite simple to attend a home game of the Suns at Municipal Stadium on any day during the season that fits their plans. However, for those that are traveling from a location near the Potomac Nationals, Harrisburg Senators, Washington Nationals ballparks, or possibly another area, my recommendation is to try to see the Hagerstown Suns playing a day game. This would give you some daylight time to explore the area and ballpark. Check the travel matrix in Part 1 of this post for an estimate of the travel distance and time for your day trip to attend a Suns game at Municipal Stadium.

A quick look at the Suns schedule on their official website shows that they play all of their Sunday home games at 2:05PM. Moreover, they have one weekday game during each month of the season either in the morning (10:35AM.) or afternoon (2:05PM or 4PM). Check the 2017 schedule on the Hagerstown Suns official website for specific dates and visiting teams.

In the next post, I will look at the Potomac Nationals, their home ballpark G. Richard Pfitzner Stadium, the Washington National 2017 Top 30 Prospects who started the season on the P-Nats roster, and some travel plans to attend a home game at their ballpark.