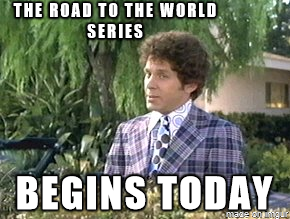 The impending snowstorm — which will undoubtedly cancel school tomorrow as well as today — begs to differ, but the 2015 campaign begins tonight as the Nationals host the Mets in Viera.

We’re done with the eyewash that is the first two weeks after pitchers and catchers report. In many ways, social media has made what we do easier, if not possible. It can enhance the experience of being a fan.

But it comes along with stuff like this and this. However, it also enables folks to mock Washington’s current manager (pic to the right), so I guess it’s not all bad 😉

As I wrote last month, spring training coverage this year will be focused on determining what can be done in the time I now have available. If we’re honest and objective, we already know that the odds of a minor-leaguer breaking camp is extremely low, if the slew of non-roster invites wasn’t already a clue.

In the meantime, as the headline says… Let The Games Begin.