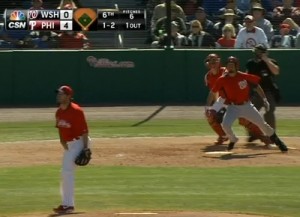 The Nats’ four-game win streak was snapped yesterday afternoon with a 6-3 loss to the Phillies, a game quickly spun by the fans and the media alike as another chapter of the burgeoning DC-Philly rivalry.

Unfortunately, not lost amid the kerfuffle was Anthony Rendon — playing spotless shortstop, no less — homering for the third time in Spring Training. As predicted less than a month ago, a hot start (.400/.429/1.000 in nine games) has gotten some folks bothered.

Thankfully, not all folks are forgetting that this happens every spring. In fact, most of what I wanted (or expected) to write was written in this blog post by Charlie Fliegel at the Nationals Review, especially this:

[P]eople believed he could hit in the majors immediately. When he was drafted, he was considered by many to be the most Major League ready prospect available. So it wouldn’t be crazy for him to be on the team right now. But they don’t NEED him right now, except in a part time role, and that would likely hinder his further development.

Back to the game yesterday…

Strasburg took the loss despite fanning six over three and 2/3rds innings and was followed by Fernando Abad, who got roughed up for the first time this spring with a pair of runs surrendered on three hits over an inning and a 1/3rd. Likewise for Cole Kimball, who gave up two runs on a walk and two hits, including a solo shot in his lone inning of work.

It’s back to Kissimmee this afternoon for another 1:05 start against the Houston Astros. The game can be heard on MLB Audio (sorry folks, the Charlie & Dave drought still has another four days to go). Tomorrow is the next TV broadcast (MASN).