The lineup board. Sadly, there’s rarely more than a couple of people filling out the scorebooks; most just look ’em over and keep on walking. 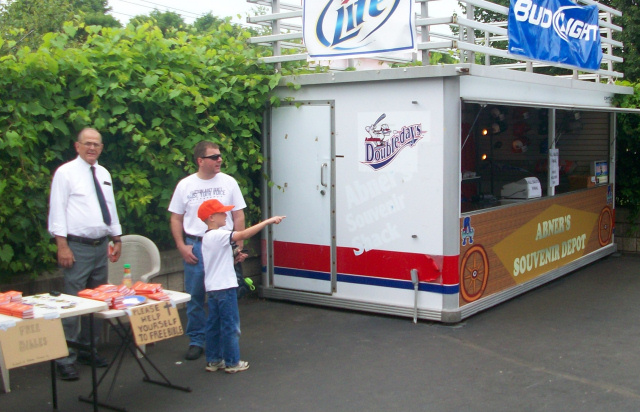 To the left, the advertiser’s table. That night, it was some church/bible group handing out free bibles.
To the right, the souvenir shack. It’s amazing how some places have a lot of gear and others, like this one, have just the very basics: shirts, caps, sweatshirts. 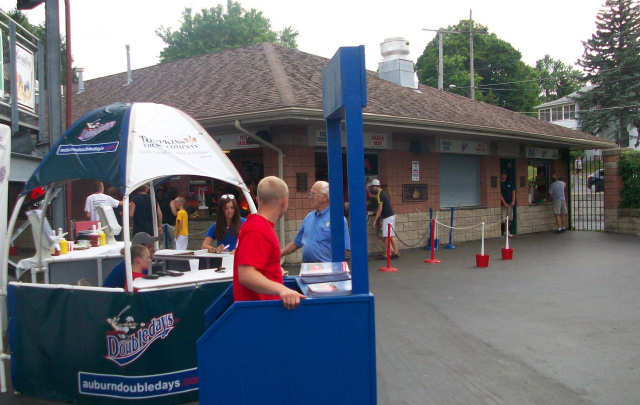 The scorecard/yearbook hawker and the information booth. In the back, a fairly sizable concessions stand. To my delight, they had waitress service, which I can never understand isn’t more common. I take it for granted at the Pfitz, but on the road I’ve come to assume they’re won’t be any, so it’s always a pleasant surprise.

The bleachers. Falcon Park looks older than 15 years old, but such is the nature of aluminum parks. As NYPL parks go, this is pretty typical.

The grandstand. For some strange reason, I’ve seen more parks with a roof/cover in the North than in the South. Again, pretty basic design that’s fairly common.

The outfield. Here’s where the older parks are most visible with the barely-LED scoreboard and a decent amount signage.

This was the view from my seat.

Last but not least, #4 is ephemeral Carlos Alvarez.