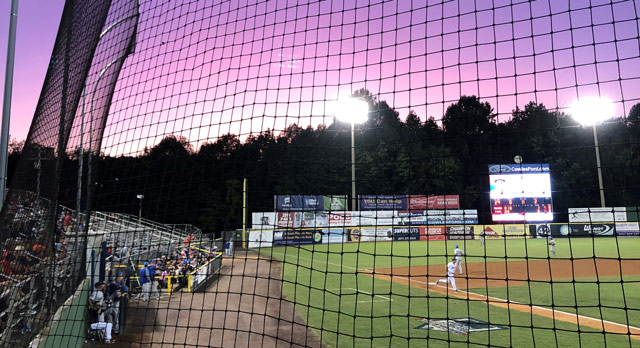 For the final game at Pfitzner Stadium, the fans were treated to dirt instead of like dirt.

Well, sort of. The lines for the concessions were still far too long for a stadium this small. The parking, which is free in six of the other nine Carolina League stadiums, cost nearly as much as the tickets to get in. The seats were small, hard, and narrow — if you were able to get a seat with a back and armrests, natch.

But going to games at the Pfitz was never about the facilities. Or the owners. Or the Godforsaken Prince William County.

It was about the baseball. And the players.

We—the diehards who showed up night after night—put up with these things because the games were more important than the stadium “experience.”

Carson Teel took the hill and gave up a run early, then settled down. Unlike the two of the past three games, his teammates did not jump out to an early lead.

That came in a four-run 5th, which, like many minor-league rallies, started with a whimper. An error, a single, and a walk loaded the bases with one out for Cole Freeman. A tapper to short was hit deep enough in the hole for just a 6-5 putout that tied the game at 1-1.

With two out and runners at 1st and 2nd, Aldrem Corredor, the Carolina League’s RBI leader, pushed his total to 86 with a three-run bomb over and out of right field to give Potomac a 4-1 lead. Two innings later, Freeman, the team’s leader in hits, runs, BA, OBP, and SB plated the fifth and final run with his 25th double.

Teel would pick up his seventh win with six innings of one-run ball on six hits and three walks while fanning six. Jorge Pantoja added two goose eggs for his second hold. Hayden Howard wobbled through the 9th with a walk and a hit (both with two out) before getting a popup behind the plate. Final score: Potomac 5 Myrtle Beach 1.

While the win kept Potomac’s playoff hopes alive, both Salem and Wilmington won last night as well. The tragic number for the P-Nats fell to three while their magic number (8) still exceeds the number of games left to play (5).

Potomac heads north to Frederick for five games through Labor Day while the Red Sox hosts Carolina for four and Wilmington hosts Myrtle Beach for four. The P-Nats must finish ahead of Red Sox as either the division winner or in second place behind the Blue Rocks to make the playoffs.