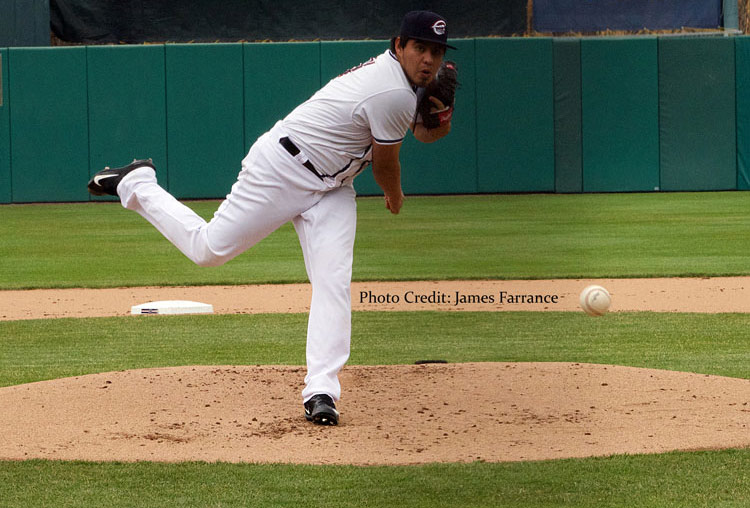 Syracuse was shut out for the third time in five games, 2-0 by Rochester on Saturday afternoon. Cesar Vargas (pictured above) pitched well enough to win, allowing one run on five hits and a walk over six innings but was saddled with the loss. Alejandro De Aza reached base for the 18th straight game with two singles and a walk while Matt Hague walked and singled. The rest of the Chiefs were 3-for-25 with nine strikeouts.

Brady Dragmire shut down the Curve on one hit as the Sens cruised to a 7-1 victory. Dragmire walked none and struck out three over eight innings for his second win of the season. Roman Mendez got in an inning of work with a scoreless 9th. Taylor Gushue led the Harrisburg offense with two singles and a double while Zach Collier also reached base three times with a double, single, and a walk.

Potomac fell behind early to Lynchburg then rallied for two in the 4th then five in the 5th to cruise to an 8-3 win and take 2nd place in the C.L. North. Joan Baez notched his first “W” with five innings of two-run ball on four hits (one HR) and two walks. Jorge Pantoja let in one of the next three innings to earn the hold while Ronald Pena mopped up in the 9th, cordero’ing around two hits with two whiffs. Carter Kieboom, who made six outs on Friday night, reached base four times on two singles and two walks to lead the P-Nats’ 13-hit assault.

Nick Raquet and Kyle Johnston combined to shut out the Braves on eight hits as the Suns took this one, 4-0. Raquet dodged the curse of the GBI with six innings pitched and six hits allowed with nary a walk and four K’s for his second win. Johnson worked around four basreunners (two hits, two walks) over the final three innings to get the save. He also fanned four. Hagerstown managed just five hits but two were for extra-bases (HR, Aldrem Corredor; double, Alejandro Flores) and drew six walks.