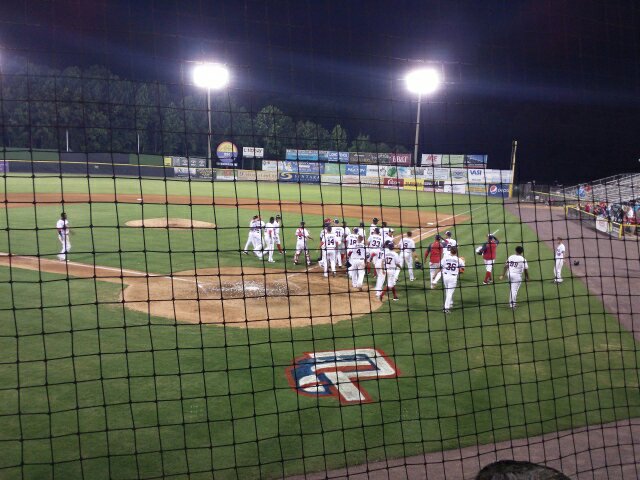 “Do you think he’ll make it back to double-A?”

The question was asked about Drew Vettleson last night in Woodbridge. While the answer may still be “probably not,” the 25-year-old made his case with four hits, a career-high six RBI, and a pair of home runs – including two-run, walkoff shot that gave Potomac an improbable 9-8 win over Winston-Salem.

Early on, it seemed even less likely as the Dash scored three times in the first, aided and abetted by back-to-back errors with one out: Whit Mayberry throwing a pickoff into the stands and Osvaldo Abreu handling a slow grounder like a greased pig (pro tip: wait until after it’s been slaughtered).

Mayberry was also hit hard in the inning, with two sharp singles to left and a double to the left-center gap and a sinking liner to shallow centerfield that CF Dale Carey just made it to and caught for the third out to end the rally.

But after walking the first batter of the 2nd, Mayberry regained his form and retired 13 straight as the Winston-Salem batters went up hunting fastballs and went over, under, and around changeups and curves.

Meanwhile, Dash pitcher Jordan Stephens retired the first six batters he faced, including a whiff of Ryan Zimmerman to end the 1st, and was in control as he worked around a single in the 3rd and a double in the 4th.

Stephens’s shutout bid went over the right field wall to lead off the 5th via Vettleson’s first home run. The two faced off again just inning later and Vettleson took away the “W” with a two-run single to tie the game at 3-3.

Winston-Salem’s Marcus Davis found the pitch he was looking for from Mayberry and homered to lead off the 7th. The 26-y.o. finished the inning and left down 4-3, with four runs charged (two earned) on five hits and a walk and three strikeouts.

It looked like his teammates would get him the win as they went to town on the first Dash reliever and scored four times to take a 7-4 lead. Rehabbing Sammy Solis gave up a leadoff single in the 8th, then struck out the side to earn the hold.

Alas, this is still “A” ball, where a three-run lead isn’t big enough for some relievers and umpires aren’t always consistent. Justin Thomas was the former, as he loaded the bases with one out on a single, walk, and a hit batsman. Chris Marco was the latter and wouldn’t ring up pinch-hitter Telvin Nash on a two-strike fastball that painted the black.

Manager Tripp Keister took Thomas out and put in Wirkin “For the Weekend” Estevez, who fanned the next two batters to end the 9th.

A walk by the “Orange” and a failed sacrifice by Alec Keller brought up Vettleson for a fifth AB and the veteran drilled a shot to the right-center gap that had, at the very least, “tie ballgame” written on it. But the line drive didn’t drop until after it cleared the wall, and as the pic shows above, the bench emptied for the celebration, with the god-awful song of the same name playing over the speakers.