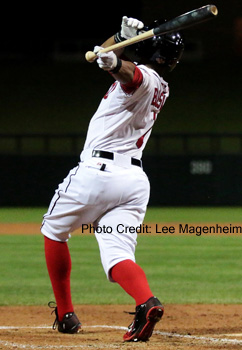 After battling back from 5-1 down to tie it in the bottom of the 9th, the Rafters coughed up the lead in the 10th and couldn’t respond for a 6-5 loss in extra innings.

Christopher Bostick (pictured) was the only Nationals player to appear in the game. As per usual, the 22-year-old batted second and played 2B for Salt River. He was 1-for-5 with a double and three strikeouts at the plate and on defense he had a putout, an error, and two assists.

Salt River has an off day today before entering the final week of the Arizona Fall League. They have four games left and train Scottsdale by two, with a tragic number of three.

Obviously, the the most notable name among those is Matt Purke, who the Nationals gambled would be healthy after being beaten like a rented mule by TCU in his freshman year, and never regained that promise. Otherwise, it’s the usual suspects in terms of minor-league veterans who’ve been serving as organizational soldiers.