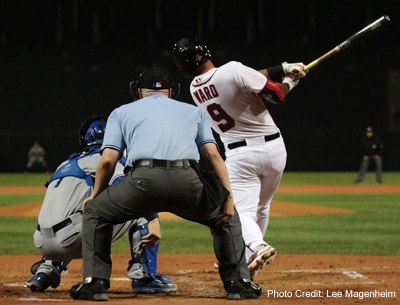 Christopher Bostick batted second and played 2B and had another strong offensive game, going 3-for-5 with a triple, a run scored, and a stolen base. Densively, he had two assists including the pivot on a 5-4-3 DP.

Drew Ward batted ninth and ended a six-game hitless streak with a double (pictured above). It was his third hit of the fall. He also took a walk (his eighth in ten games). Defensively, he had three assist, started the aforementioned double play, but also committed his third error.

Abel De Los Santos took the loss with two runs allowed (one earned) on two hits and two walks over an inning and 2/3rds. He threw 34 pitches, 17 for strikes and struck out two.

Nick Lee finished the game, tossing three and a 1/3rd innings with three runs allowed (two earned) on five hits, including a home run. He walked one, struck out three, hit a batter, and uncorked a wild pitch. He threw 66 pitches (seven less than the Salt River SP), 37 of which were strikes.

Salt River’s tragic number is now four. They face off this afternoon against AFL West-leading Surprise, then will host the Military Appreciation game tomorrow night (also against Surprise).