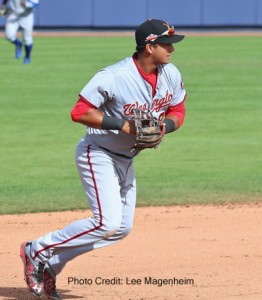 One step up, one step back as the Rafters were shut out on three hits for a 2-0 loss to Peoria on Wednesday afternoon.

Ward (pictured to the right) went 0-for-3 in his first appearance since last Thursday. Ward participated in four double plays, two on offense and two on defense, where he racked four assists total.

Estevez gave up a run on a home run and also walked a batter in one inning. He threw 16 pitches, 10 for strikes but struck out none for the second time in as many outings.