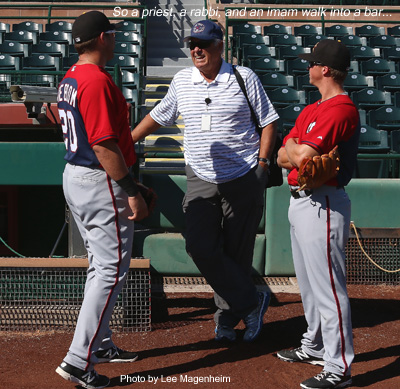 The AFL passed its midpoint with yesterday’s game, which saw Mesa demolish Surprise, 14-0. Thanks to the vagaries of a three-team division and sharing it with the league’s best team, the Solar Sox won’t be playing in the title game, though it should be noted that also means Nats fans won’t have to listen to Tom Verducci or someone of his ilk parrot the press guide while calling the title game on MLB Network.

Felipe Rivero, who left his previous start with a turned ankle per our Arizona correspondent, continues to struggle as he was strafed for five runs on Friday in a 9-4 loss to raise his pitcher’s line to 9.00/5.53/1.85.

Tony Renda, who was hitless in his first five games, has quietly put together a six-game hit streak to raise his batting average to something resembling a starter instead of a pitcher.

Catchers Spencer Kieboom and Pedro Severino, who are splitting time with Toronto’s Sean Ochinko, are both hitting (.273 and .375 respectively) despite their limited game action.

Relievers Derek Self, Matt Grace, and Neil Holland aren’t being used terribly often, but they’ve combined for six scoreless innings over four appearances this past week.

WINTER LEAGUE SIGHTINGS
As noted a couple of weeks ago, the Dominican Winter League has started up and with it have come the following sightings of Nats players and farmhands:

And the following players have also surfaced in the Venezuelan Winter League:

Unfortunately, those three titles remain the only ones won by a Nationals full-season affiliate. Hagerstown has come oh-so-close the past two seasons while Harrisburg has fallen in the first round three times (2010, 2011, 2013). The hope with any league championship is that the spirit of winning is instilled and will carry on as the baby Nats grow up into big Nats, which will be badly needed as some of the 2014 Potomac guys head to Harrisburg in 2015.

The 78-win P-Nats were not statistical monsters: 3rd in the league offensively, 5th in pitching, 3rd defensively. Their hallmark was the walkoff win, which they did 14 times, and they were phenomenal in one-run games (32-13). But most importantly, once they got the lead, they held onto it: 50-1 when leading after eight innings, 55-2 when they were ahead after the seventh. That combination of (p)luck enabled them to outperform their Pythagorean projection (69-67) by an astounding nine games and carried over into the playoffs where they took three of four from a team that had beaten them five out of the previous six meetings and 11 of 19 overall.

And now I present to you the obligatory Top 5’s:

Honorable mentions go to Shawn Pleffner and Kylin Turnbull, a pair of 24-year-olds who turned 25 in August and September respectively. As mentioned last week, we have a hit a point where we can no longer gloss over the advanced age of some of these players, which is necessarily their fault as the Nats do have a tendency to both draft collegiate ballplayers while conservatively moving them up the ladder (though 2014 did see a handful of three-level players). Folks interested in viewing the exploits of all 63 players (including 10 rehab assignments) can see them here.