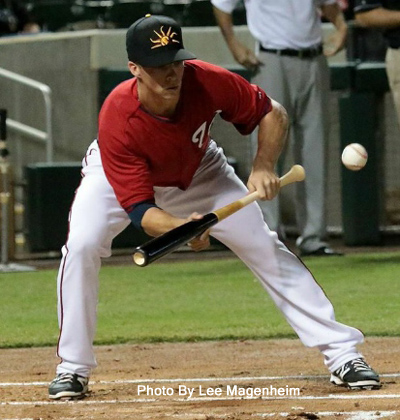 I had been hoping as I plugged away at this week’s column/post during my time confetti to be able to make some reference to how the parent club is doing in the playoffs. Now, I’m just hoping this will get read between wailing and second-guessing from last night’s 2-1 loss in 18 innings.

ARIZONA FALL LEAGUE
The “other” fall baseball starts up on Tuesday, with exhibition festivities held last night (hence, the pic). It looks like there won’t be a taxi squad guy this year, as the Nationals also officially placed the seven players named in late August onto the roster of the Mesa Solar Sox.

BA TOP 20 PROSPECT LISTS
The love-fest for Reynaldo Lopez continues as Baseball America named him the #2 prospect in the New York Penn League, citing what we all know now: a 96-99 FB, a killer 11-5 CV, and a devastating changeup. Also named (#13) was catcher Raudy Read, who may be more intriguing given how thin the position had gotten. The trio of Pedro Severino, Read and Reetz are all under 22 and should populate the rosters at AA, Low-A, and SS-A with a resurgent Spencer Kieboom the likely starter at High-A (though he’ll be 24).

BA loves to double-dip, which is why Lopez got the nod as the #3 prospect of the South Atlantic League, two spots behind Lucas Giolito. In a bigger market, or a true baseball town, these two would have a nickname by now (Giopez?) though I suspect they won’t be teammates again until they’re both in AA. Coming in at #14 for the Sally Top 20 was Wilmer Difo, which I suspect is a function of his age (22) as twelve of the thirteen players ranked above him were 21 or younger.

TRANSACTION STUFF
So far, it’s quiet, which is the norm. Thus far, two players have been re-signed for next year — IF Cutter Dykstra and RHP Sam Runion. As much as we’d like to read into that, Occam’s Razor suggests it’s simply that both the organization and the player are content to continue with the 2014 arrangement for 2015.

2014 AFFILIATE SHUFFLE
Thankfully, the Nats affiliates will remain the same for another two years, which is hardly a shock — even with the rumblings in Hagerstown and Fredericksburg, which continues to be more talk than walk. It does however mean that they’ll be seeing some new opponents, as the Rockies join the Eastern League and the Cubs join the Carolina League, replacing the Twins and Rangers, respectively. Jamestown will be moving to Morgantown, which will require some new scheduling for Auburn and longer bus rides for everyone.

THE GCL NATIONALS
Let’s face it: No matter what this team did in 2014, it would be a disappointment compared to 2013. It also bears repeating that folks shouldn’t get too high or too low about performance in the short-season leagues (and yes, I’ve been guilty of that “crime”). So even though the team reverted to the mean — 25-35, .417 — there’s still some kids to get excited about (ok, that sounds a little creepy).
Offensively, the team was pretty much league average (4.32 vs. 4.37) but the pitching was second-worst in the league, giving up nearly a run more per game (5.32 vs. 4.37).

I’d give an honorable mention to Edwin Lora who batted .293 and stole 13 bases, but worry about the lack of doubles (just eight out of 53 hits). It was a stretch to name five pitchers, as it seemed like the best you could say for most of these guys is that they were still teenagers. Folks who are interested in seeing the entire team’s stats, should click here.