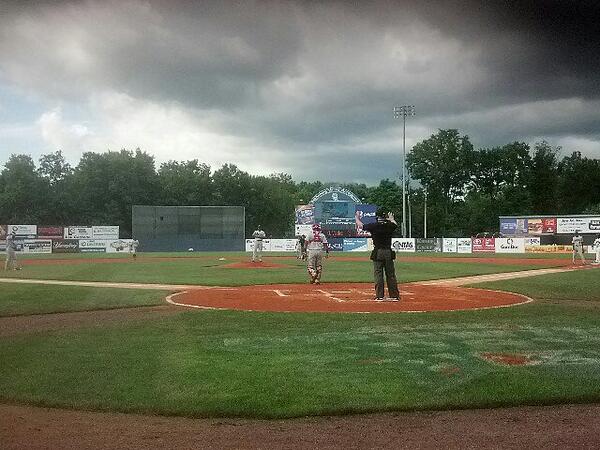 After getting rained out the night before, the clouds were ominous as Auburn and Mahoning Valley began play last night. But the rain never came and the two teams combined for a pair of close games, with the Scrappers posting a 3-0 shutout in the opener and the Doubledays returning the favor with a 2-0 whitewash in the nightcap.

Auburn’s Reynaldo Lopez took the hill in Game One and quickly established a mid-90s fastball… but not much else. The 20-y.o. Dominican walked two in the first inning as he tried to get a feel for the strike zone, showing a slider, change, and a curve.

Despite the Scrappers not having to worry too much about his secondary offerings, they struggled to get the bat on the ball solidly. They avoided the K, but also popped up four times in the first three innings.

Mahoning Valley got on the board when a two-out, two-strike fastball was taken the other way by the No. 5 batter Jorge Martinez to drive in leadoff man Ordormar Valdez, who got on with with a single, and cleanup man Leo Castillo, who walked.

Brett Mooneyham was the first man out of the ‘pen in the 5th and served up a solo HR to the first batter he faced. He then retired the side in order and the leadoff batter in the next before loading the bases in the 6th on a single, hit batsman, and a walk — committing an error on a poor pickoff throw but getting out of the mess with by starting a 1-2-3 DP to end the inning.

Offensively, the Doubledays were no-hit for three innings by 20-y.o. Sean Brady, a southpaw who could throw a nice 12-6 hook, just not for strikes. Unlike Lopez, he kept with the secondary pitches and might have had four no-hit frames had he not been caught napping by Jose “Orange” Marmolejos-Diaz, who dropped down a bunt with one out in the 4th.

Diaz went to 2nd on a two-out walk by Cody Gunter and was stranded there as Raudy Read flew out to end the 4th. That would be the one and only batter to get into scoring position as the two Scrapper relievers finished the job with three scoreless innings.

In the second game, Auburn got on the board first in the 1st to put Mahoning Valley in chase mode for the rest of the game. With one out, Bryan Mejia singled, then stole second. After a Drew Vettleson strikeout, Jean Carlos Valdez ripped a grounder through the 5/6 hole for an RBI single to put the Doubledays up 1-0.

Luis Torres was the starter in the second game. He didn’t flash the heat like Lopez, but had much better breaking pitches and much better command. He retired the first five batters he faced and didn’t allow a runner to reach second until the 5th, which he did by firing a strike to the first base wall for a two-base error.

That was enough for manager Gary Cathcart to pull the plug and insert R.C. Orlan into the game. The slender southpaw got the Scrappers leadoff man to pop up to end the 5th, and preserve a 1-0 lead.

Auburn plated an insurance run in the 6th with some help from Mahoning Valley. Vettleson and Valdez went back-to-back with singles to lead off the inning while Cody Gunter drew a walk to load the bases with nobody out.

Matthew Page couldn’t get ’em in when a tapper to first base was tossed in to home plate for the force, erasing Vettleson, but hit slowly enough for Page to beat the return throw from the catcher.

Garrett Gordon also came up short with a flyout to right field which wasn’t hit deep enough to send in the runner (Cathcart wisely put the brakes on Valdez, as the Scrappers outfielder fired in a bullet in that probably would have nailed him).

And then, after two good plays to deny Auburn, Mahoning Valley literally threw it away with a wild pitch and dug themselves into a 2-0 hole.

Orlan retired the side in order in the bottom of the 6th, which would earn him the win. He was replaced by David Napoli in the 7th, who got the first two batters easily. An error and a walk made things interesting before he struck out the final batter with a sharp curve to earn the save. It would be the first win and save for Orlan and Napoli, respectively.

The Doubledays (3-4) return to upstate New York for a pair of games against the Crosscutters tonight and tomorrow before hosting the Scrappers on Sunday and Monday.