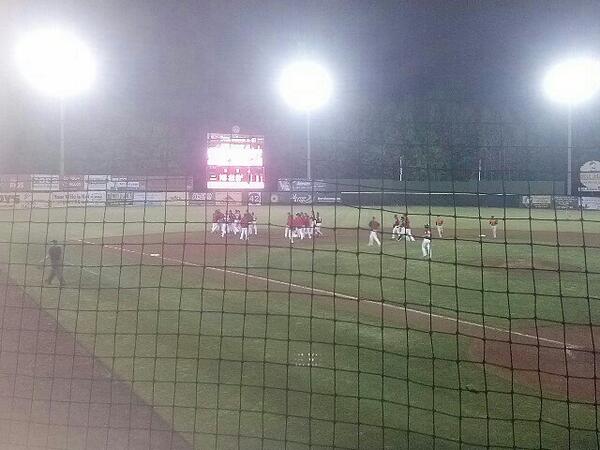 The Potomac Nationals rallied from an early 2-0 deficit to walk off in the 9th with a 4-3 win over Frederick. Randolph Oduber’s two-out double to right-center, his second two-bagger of the game and third hit overall, sent in Justin Miller all the way from first base to complete the comeback effort.

Of course, had the P-Nats not been so sloppy in the first, the drama would not have been necessary. It started with the very first batter as Oscar Tejeda booted a grounder to third by the Keys leadoff man Glynn Davis. After a 1-3 sacrifice moved up Davis, Zane Chavez singled to center.

For the second time in as many games Narciso Mesa launched a rocket in from center. If Cole Leonida were 7’2″ he might have caught it on the fly. Instead it sailed to the backstop and allowed Chavez to take second. Former P-Nat Mike Burgess drove in the first run with a groundout to first.

Frederick got another gift run when Stephen Perez committed his eighth error on a routine grounder, pulling the 6’5″ first baseman Shawn Pleffner off the bag far enough that the southpaw couldn’t get the tag play ruled in his favor (it looked like he got him but thanks to the Carolina League’s two-umpire system, the call was made from across the diamond).

Burgess would double and score in the 4th, catching the Potomac battery napping with a steal of third and trotting home on single by Jason Esposito as the Keys extended their lead to 3-0.

Frederick’s Bradley Wager went through the Potomac lineup twice with just a single hit allowed, retiring nine in a row from the 1st to the 4th, but failed the true test of a starter — making it through the lineup a third time.

Oduber doubled to the LF corner to start the 6th, Perez singled to center to push him third, and Tejeda atoned for his error with a three run bomb on a BP warmer to the tie it up at 3-3 and chase Wager from the game.

The big fly also took John Simms off the hook, as the 22-y.o. survived the errors to notch the very first quality start for Potomac in 2014: three runs (one earned) on four hits over six innings with no walks and two strikeouts.

The gamewinner came after a questionable called third strike in the 9th against Leonida, who protested without getting tossed, perhaps influencing the walk that followed to Justin Miller. Mesa missed his chance for redemption with a first-pitch popup for the second out in the ninth, setting up Oduber’s heroics.

The win went to Robert Benincasa, who pitched a scoreless 9th, while Rafael Martin made his first appearance of the year with two perfect innings in the 7th and 8th.