Ed. Note: Frequent commenter SoulDrummer (@souldrummer25 on the Twitters) got quite the treat when he drove up to Harrisburg…
It’s Michael Taylor’s world today and we’re only living it. 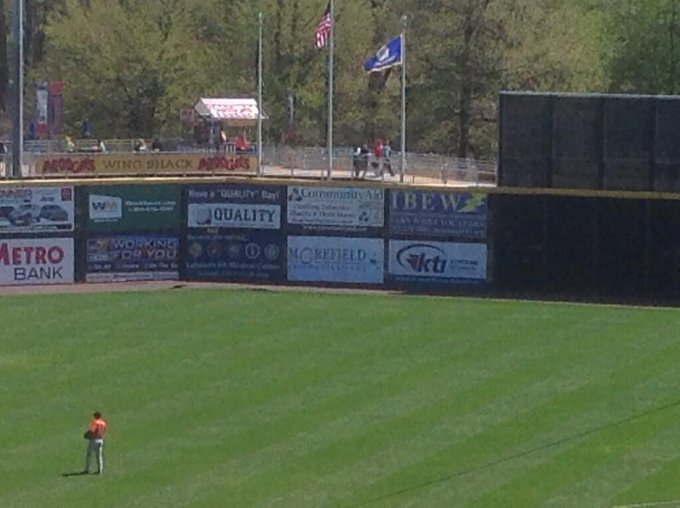 Michael Taylor with a long HR on the 1st pitch B1. It landed beyond the people on the boardwalk in CF [pic to the right]
Terry Byrom @hbgsensradio

Michael Taylor just hit his 3rd home run of the game. He’s the first #HbgSens player to hit 3 in a game since Danny Espinosa in 2010.
Geoff Morrow ‏@RageAgainstGMo

Sadly, I missed first pitch due to a long ticket line and my own meandering ways in heading up Rt. 15 to head to Harrisburg. I didn’t mind that. What I did mind is that the Senators didn’t have Terry Byrom’s radio call audibly available while we were in line. They had a weak speaker too far away from the line that wasn’t loud enough to be properly heard.

In a shocking development, the Senators managed to play several innings of good baseball. They built up a 10-1 lead. They were so far ahead that I stopped paying attention to the game after maybe the third inning or so. I struck up a conversation with this fine fellow in a Lawrence Taylor throwback jersey who just so happens to be a Hagerstown Suns ticket holder. He claimed that Drew Ward is a comparable ballplayer to Bryce Harper and far nicer as a human being. Perhaps we should all attend Giolito’s next start in Hagerstown on Friday.

Given that these are the Harrisburg Senators, they decided to revert to their tragic ways. A 10-1 lead became a 10-6 score in the top of the 7th when the persistent Bowie Baysox score five, that is five, runs off of Gabriel Alfaro. The 31-year-old Mr. Alfaro has given up 15 runs in the 11.1 innings that he has pitched.

The Senators then sent Paulo Espino into pitch the 8th inning. Mr. Espino was the International League Pitcher of the week in August of 2011. He will not be the Eastern League Pitcher of the Week for the week concluding on April 27th. Espino first drew two ground outs to the infield. But then his inner 2014 Harrisburg Senator came out. He gave up a pair of singles and a double before getting the hook with two outs and two on from Harrisburg manager Brian Daubach.

He called upon Richie Mirowski to restore order and protect a now 10-7 lead. The 25-year-old rolled a grounder to end the inning.
Thankfully, Mirowski is good at throwing baseballs, and came back out for the top of the 9th. Strikeout. Strikeout. Walk. (Because it wouldn’t be entertaining to retire the side in order, would it?)

Chien Hsien-Chang then became my favorite member of the Bowie Baysox. Why, you ask? He was the 27th out, grounding out to first to end the game and give Richie Mirowski his first save, Felipe Rivero his first win, and end a six-game losing streak.