This Last Night in Bowie is going to focus more on my experience with the ballpark than with the game. Luke’s got the boxscore up. You can deduce all of the carnage from an excruciating loss.

Sen’s fall behind early on a poor peformance from starter Rob Gilliam. Lefty sidewinder Zack Jackson same in and restored order, retiring six in a row to start his night.

Slowly, the Senators eked their way back into the game and tied it up in the top of the 9th with a rally started by their current MVP, Michael Taylor, who got on, stole a base but caught in a rundown on a comebacker. He shrewdly occupied the Baysox long enough for the batter (Cutter Dykstra) to get all the way to second. Dykstra would eventually score on a Jason Martinson RBI single.

A couple of innings later, the Senators lost on a walkoff “single” that appeared to be a routine grounder to second that was poorly played from my poor view of the play. Wonder what Terry Byrom’s call on the radio sounded like.

Maybe they just wanted to go home. It was chilly for some by that time and the management was just praying that somebody would stick around long enough for what turned out to be an excellent fireworks show, better than many of the ones that I’ve seen at Nats Park. 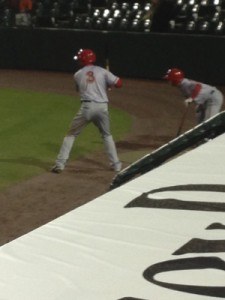 The most important part of this game is that I’ve been given a powerful tool for bringing positive change to the Natmosphere: Michael Taylor’s game-used, slightly cracked bat. He observed me the whole game, acting like a fool praising him to high heaven. If the Bowie Baysox team and fans know one player who is likely to defeat them, that player is most likely Michael Taylor.

Start to finish, here’s Last Night In Bowie. Bowie is not in downtown DC so it takes a bit of doing to get out there. I took a bus out to New Carollton and then a cab to get to the stadium. Landon, who sold me my ticket online, and a friendly saleswoman gave me my ticket at will call and directed me to the Angus Burger stand for pregame refreshment — beans, slaw, and a burger, which ran me about $12, plus a souvenir cup with a Baysox schedule for another $5. The burger was merely okay. Slaw and beans were fine.

One cool thing: The Baysox will give you an Orioles passport at their Customer Relations stand, which you can get stamped as you hit all of their affiliates. 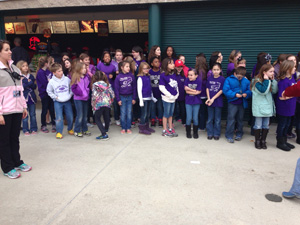 Bowie needs to get a better scoreboard. It was useless in informing me of players and stats during the game. Thankfully, there was a Philly fan sitting next to me scoring along with the game in my seats above the Senators dugout. He helped me fill out my scorebook with the lineups so that I only need to do minor edits from the online boxscore if I choose to make it fully accurate.

There were a couple of kids right behind me who had a ball harassing me, a vile opposing fan, by yelling “CHARGE!” as loud as they could every time that the Baysox were up at bat. All in good fun! I took it in stride. I clowned and encouraged players throghout the game. Sadly, I was unable to share my karaoke skills. I did, however, did some line dancing and was a hit on “I Like To Move It, Move It” during the extra innings.

The Senators were poorly represented in the fairly sparse crowd, but there was one City Island regular behind me who I schooled on this website and the Washington Nationals farm system. I also shook Terry Byrom’s hand when I went up to the concourse to charge my phone. Terry is the voice of the Senators, and he’s a totally class act.

I was extremely pleased by the customer service that I received throughout the stadium. While I would prefer to be loyal to Nats affiliates like the P-Nats and Suns, the Baysox are clearly the best value and most professional operation of all the minor-league teams near DC.

As the weather got colder and the game drifted into extra innings, families slowly filtered out of the stadium before the game was over. The hardy few enjoyed a thriller, though, and everybody went home happy.