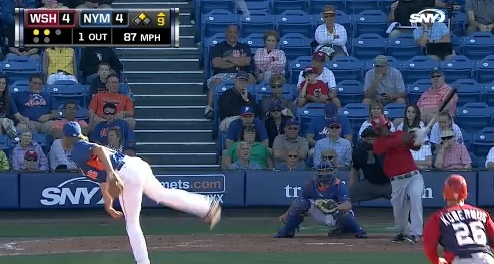 Michael Taylor lived up to the hype this week, smacking an RBI triple to right-center in the top of the 9th to complete Washington’s comeback for a 5-4 Nats win over the Mets in the 2014 Grapefruit League opener.

The three-base knock gave Manny Delcarmen the win for a scoreless 8th in which the bullpen hopeful struck out two and allowed a hit. Tyler Robertson set the side down in order to close out the game and earn the save.

It also took Christian Garcia off the hook for a rough sixth inning that saw New York’s N.L. entry score four times on four hits, including a two-run blast by Ike Davis.

Taylor Jordan got the starting nod and laid two goose eggs, allowing just a hit and no walks while fanning two. A.J. Cole followed with two zeroes on the board, but gave up two doubles and a single and was saved from allowing a run by a ground-rule double in the 4th.

As is often the case with road spring training games, the “scrubs” outnumbered the regulars. Here’s a rundown of how the minor-leaguers fared:

• Eury Perez started in CF and went 1-for-2, making a spectacular catch in the 2nd inning to rob Lucas Duda of extra bases.
• Taylor took over duties from Perez and walked in his first plate appearance
• Steve Souza came off the bench and played RF, going 1-for-3.
• Mike Fontenot spelled Danny Espinosa at 2B but was 0-for-3.
• Matt Skole took over for Adam LaRoche at 1B and went 1-for-2 with an RBI double and made a pick to complete a 4-B-3 DP.
• Zach Walters replaced Ian Desmond at SS and was 2-for-2 with an RBI double that tied the game in the 8th.
• Jhonatan Solano followed Wilson Ramos behind the plate but was 0-for-2 while standing in the box.
• Koyie Hill pinch-hit for Tyler Moore as the DH and drove in a run with an RBI single while going 1-for-2 overall.
• Jeff Kobernus subbed for Scott Hairston in LF and scored the game-winning run after his one-out single in the 9th and was 1-for-2 for the game.
• RHP Aaron Barrett allowed a hit but walked none and struck out none in his lone inning of work.

The Nationals make their home debut tomorrow afernoon versus the Atlanta. Jordan Zimmermann is expected to make the start. The game can be heard on MLB Radio.