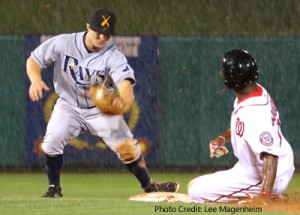 Brian Goodwin went 2-for-4 and drove in three as Mesa edged Salt River, 5-4 in a twice-delayed, rain-shortened contest last night in Arizona.

The Nats top outfield prospect, who turned 23 on Saturday, blasted a two-run shot with two outs in the 3rd to cut into an early Rafters 3-0 lead. He would plate a third run with groundout as part of the three-run 5th that saw the Solar Sox take the eventual 5-4 lead.

In the 8th, Goodwin singled and stole second (pictured) before the rains came for the final time with one out. 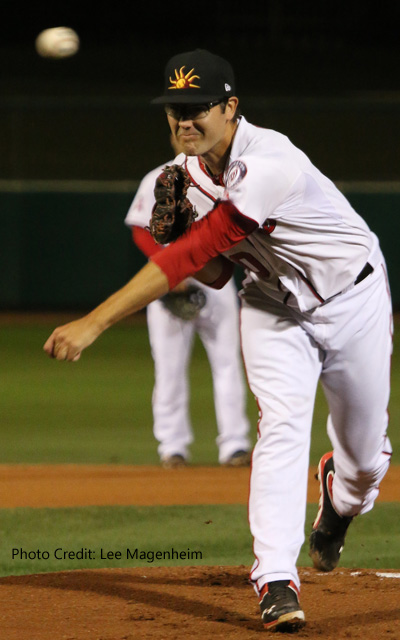 Matt Purke got the start but was touched for the first three Salt River runs in the 2nd. He would go four innings with four hits and two walks allowed. He struck out just one with 61 pitches thrown, 37 for strikes.

The win improves Mesa to 13-8-1 for the fall and returns the lead over Salt River to 2½ games. The two teams rematch tonight in Salt River and will be televised (weather permitting) on the MLB Network.

Purke was the subject of today’s “Scout’s View” column in Baseball America (paid sub) in which he was compared to LHP Cole Hamels by former Philadelphia area scout Therron Brockish, who saw him on October 23rd (5IP, 1H, 0R, BB, 3K). Brockish said Purke was hitting 92-93 on the gun but pointed to his changeup as his “out pitch,” not the curve, which he felt was only his third-best pitch and more of a slurve (though effective against LHBs).

Brockish is bullish on Purke, predicting “[He’s] on the path to be in Double-A or Triple-A next summer and competing for a big league spot in 2015.”