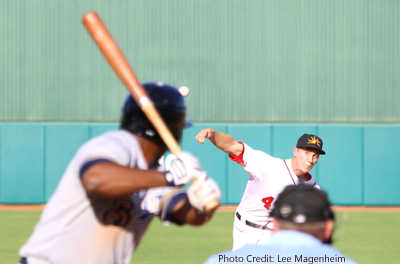 Surprise struck for three runs twice while holding Mesa to four hits in a 6-1 Solar Sox loss to close out the week.

A total of five Nationals got into the game yesterday:

• Sammy Solis started and took the loss, giving up the first three runs in the 1st and finishing with six hits allowed over three innings. He walked one and struck out two, tossing 61 pitches with 40 going for strikes.

• Robert Benincasa (pictured) also pitched, setting the side down in order in the 9th while recording a strikeout.

• Brian Goodwin batted leadoff as the DH. He singled once and struck out twice in four AB’s.

• Steve Souza Jr. followed Skole in the lineup and went 1-for-3 but was caught stealing for the first time. He played left field and made two putouts.