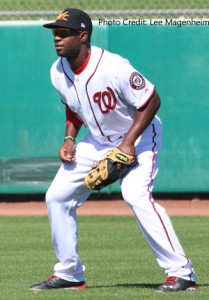 Brian Goodwin (pictured) was the sole National to appear in the game. He singled and scored in the 1st inning and drove in a run with a two-out safety in the second, snapping what was then a 2-2 tie. The 22-y.o. batted second and played centerfield, finishing the game at 2-for-5 with one putout on defense.

The win dropped Scottsdale back to 2½ games behind Mesa in the AFL East. The Solar Sox will see how they play in Peoria, visiting the Saguaros this afternoon.

BONUS AUDIO COVERAGE
Lee Magenheim caught up with Richie Mirowski, the Nats 45th Rd. pick out of Oklahoma Baptist in 2011, who’s gone from short-season A to AA in just two seasons.